The last day in Forks was spent around Klaloch’s Beach One. After checking out of the Town Motel I headed south on the 101 for one last look at the coast. I was to head inland later this day and though I’d still see the water – it wouldn’t be the coast of the North Pacific. I wanted to say goodbye.

Looking for nothing specific and driving slowly, the large burls on Beach One’s Sitka Spruce caught my eye and I stopped. A short stroll through the Spruce Trail to an overlook revealed there was more, worthy of gearing up to explore. I hustled back to the car, grabbed my pack and tripod and headed back towards the overlook. 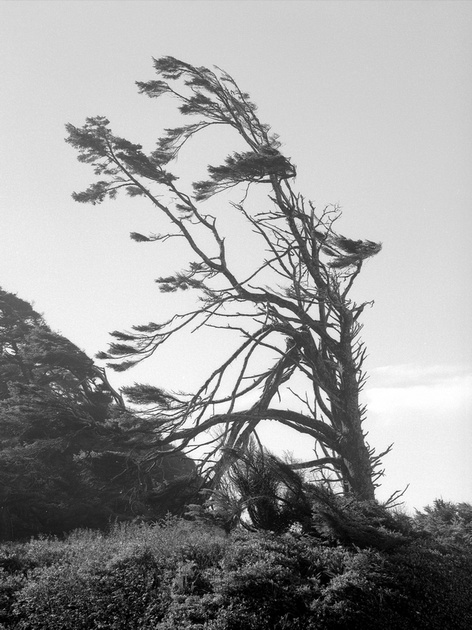 A young man I’d seen at other stops during the week passed by and we exchanged greetings as he disappeared down the trail towards the beach. I set up above, watching this scene unfold. A weathered Shore Pine battered and bent by the wind caught my eye, accentuated by mist coming from the pounding surf. One of the things I envisioned when dreaming of photographing the pacific northwest is atmosphere. I’m so used to clear, high-altitude, sunny, bluebird days here in Colorado. Any time I can see atmosphere – and it’s not pollution – I notice.

After a bit the young man returned, commenting the best view was probably from up here. I finished up and headed down the trail towards the beach – stopping when I came across the scene below. Morning light was filtering through the same surf-generated mist and the back light was producing some lovely tones I knew would reproduce well on black and white film. 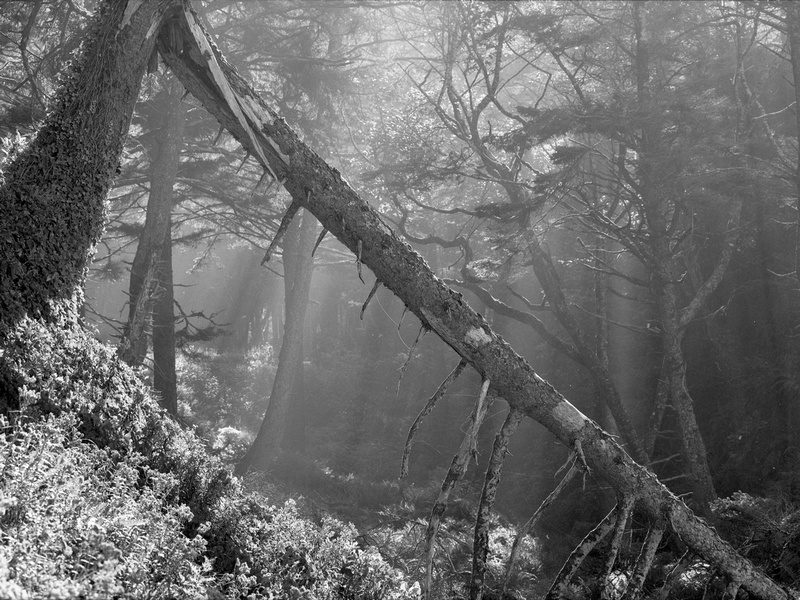 I had one frame of Ilford Delta 100 left in the back loaded and set up for a shot. Shooting directly into the sun is always a challenge. Fortunately, earlier I’d made the decision to pack the accordion bellows sun shade just in case. On the 150mm lens there is great extension with the bellows before vignetting appears so I racked it out as far as possible to cut down glare from the sun.

After making the first frame I rewound, then loaded a new roll of Ilford PanF50. I hoped the tones would represent half as well as I suspected, and bracketed 3 more frames.

There are several things about this image that caught my eye. First is the dramatic back light shafts radiating vertically in the frame. Secondly – I enjoy the tangled mass of life in the background. I love the twisted, intertwining angles and chaotic, somewhat vague presence. Of course the strong, diagonal felled tree provides the obvious center of interest. The trick was balancing exposure so the fine detail wasn’t lost on the trunk. I knew contrast in the scene was manageable to hold detail in the felled tree and still retain detail in the background light beams. But that tuft of foliage in bright sun in the bottom, left corner was going to be a problem. Waiting for it to soften ever so slightly would help everything balance out just a little better.  But perhaps the most pleasing thing to me about this image is the light – specifically – the subtle rim light atop the felled foreground tree. I love how the darkest, most densely detailed part of the image immediately contrasts with the brightest, thinnest, most delicate highlight running at an angle through the frame. Add to that the delicate, nearly invisible cob webs aglow by backlight and the center of the frame is filled with interest, while all the periphery leans in to support it.

Of the images made this trip, this is one of several that when the shutter clicked, I couldn’t wait to see the results. Upon processing, the Delta 100 frame was acceptable – but the PanF50 frames were superior in tone and detail. Upon processing (DDX @70 degrees for 8 minutes) the healthiest neg was the first one, made at normal (base level) EV. 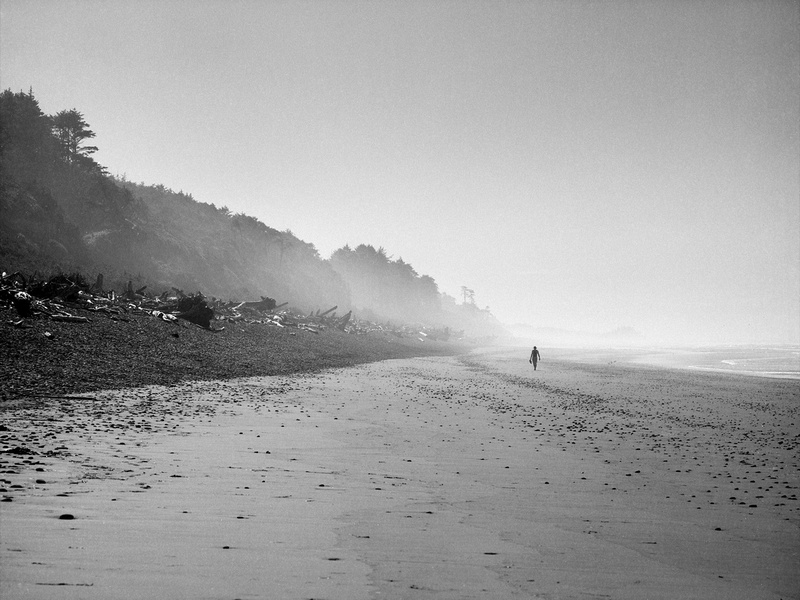 A lone beach-comber enjoys the peace and solitude of Olympic National Park’s Beach One.

After making the image and packing up I continued to explore Beach One for several more hours, not wishing my time on the Coast to end. I removed my boots and walked the shore with tripod and camera over my shoulder. 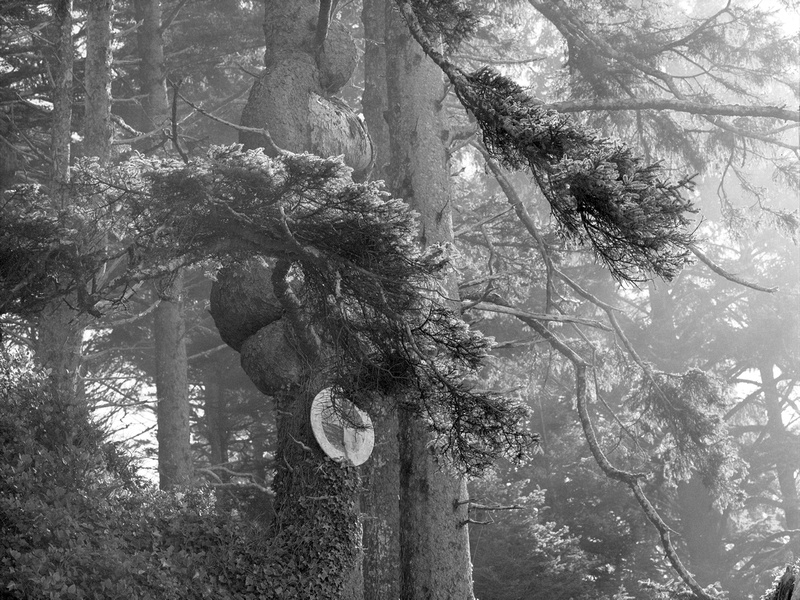 Mist produced by constantly pounding surf influences everything in the vicinity of the shore. Here, the sign for a trail announces to beach hikers a way to reach the headland from shore. Large, bulbous burls infesting the Sitka Spruce along Beach One are somewhat of a mystery.

The mist continued to intrigue me, obscuring landforms and generating that ethereal quality I associate with the Pacific Northwest – and dreamt of when pre-visualizing the trip. I was one of a small handful of people at Beach One this day and the feeling of peace and seclusion was wonderful. 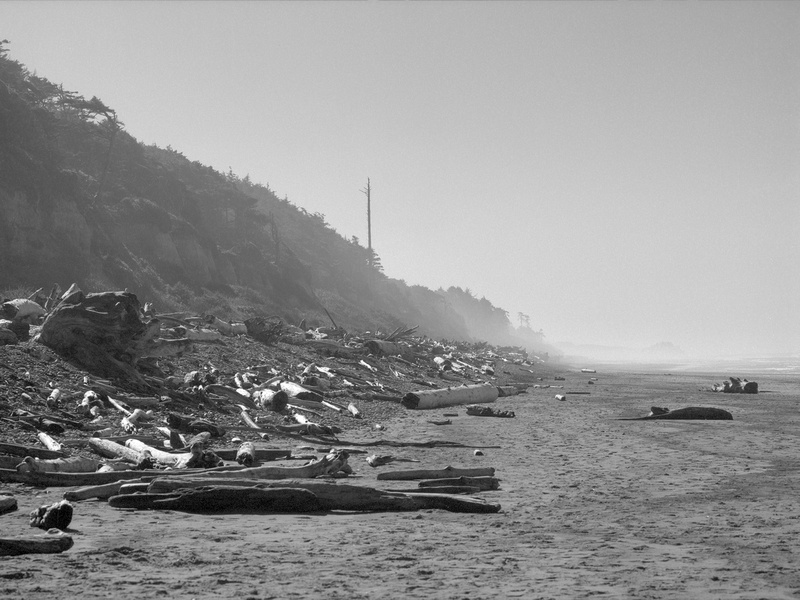 The relatively little-traveled Beach One is a great place to experience the wilderness of the Pacific Northwest Coast without the crowds.

Sometime around 1 or 2pm I decided there was more to see and with a bit of a heavy spirit bid farewell to the Coast, wondering when I’d see it once more. I zipped my pack, now full of half crab shells I’d found along the shore, and headed back up the trail toward the car. Back in Forks I gassed up, called Annie to touch base, then headed north on the 101 ready for what other treasures the Olympic held. The day was off to an excellent start.