Chicago Lakes from Summit Lake Overlook, Mount Evans, Colorado (2016). To view image as large as possible please click and you’ll be directed to the gallery containing it.

One of the commonly cited demerits of 35mm film is its lack of resolution when you want to print really big. It’s true. This is a physical limitation; a wall unclimbable by any camera or any lens combination. Leica, Nikon, Canon, Zeiss… it matters not. A frame of 35mm film is a fixed size: 24mm x 36mm, and only contains so much data when exposed. Being a strong advocate of film photography – especially 35mm and medium format film photography – has pushed me outside of conventional use of these cameras looking for something a little different. This 5-foot wide panoramic image was stitched together from 5 vertically exposed frames shot with the Nikon F2AS – a camera made approximately 40 years ago – on Ilford Delta 100 35mm film. A ‘normal’ 50mm lens was used to minimize geometric distortion. Exposure is the same on all frames. The film was developed in Ilford’s Ilfosol 3 developer, then the frames were scanned using the dedicated Nikon film scanner. During scanning the exposure was locked to maintain consistency across all frames – something that aids in the software stitching process. 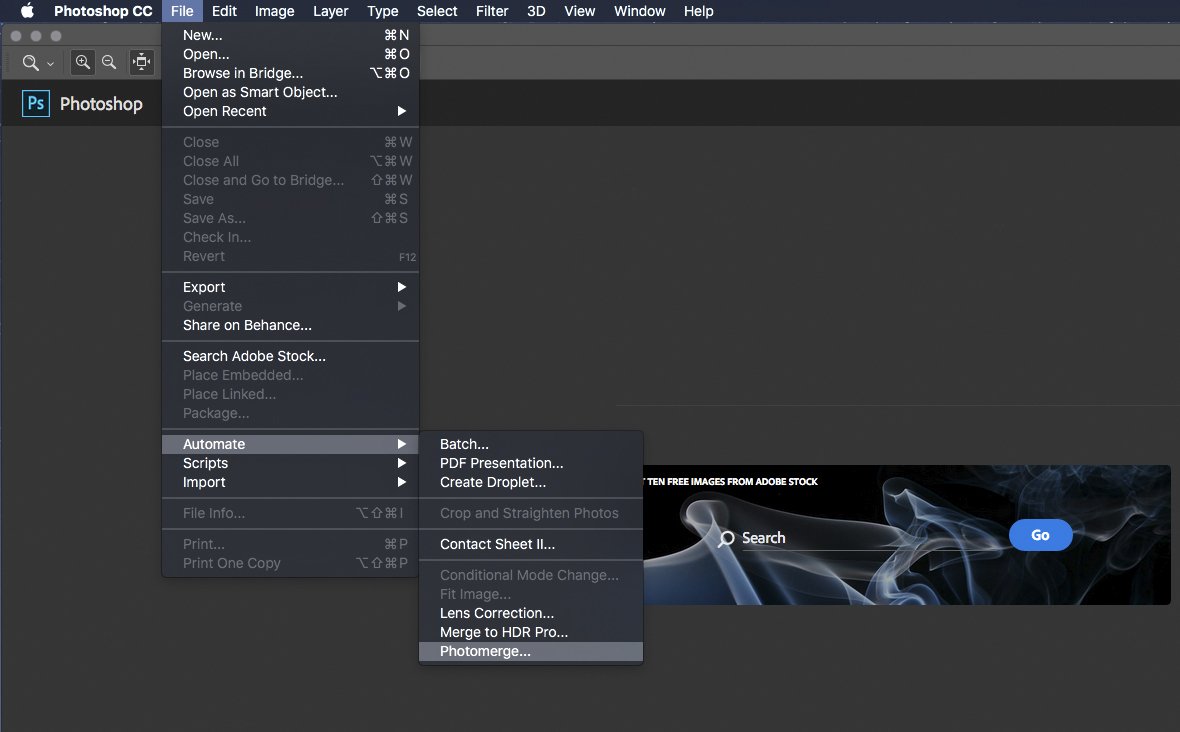 To blend the images together into a panoramic shot, Photoshop was used. Photoshop has an excellent tool under the File\Automate\Photomerge\ menu allowing you to load a sequence of images and allow the computer to determine the best configuration. Options include the Layout of the finished piece,  Blend Images Together, Vignette Removal, Geometric Distortion Correction and Content aware Fill Transparent Areas. I select Auto for Layout, Blend Images Together, Vignette Removal and Geometric Distortion Correction. 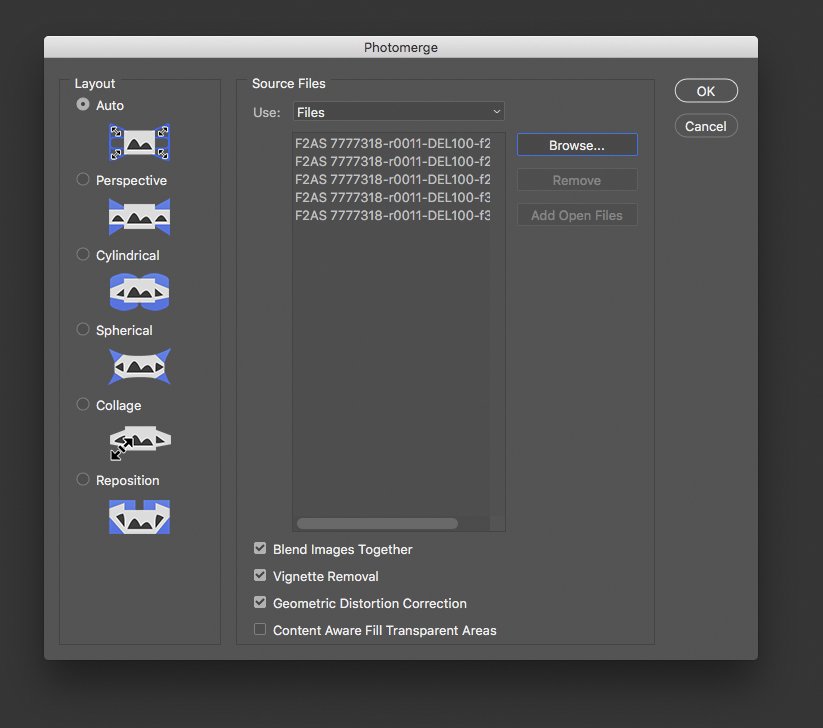 From there Photoshop will run a series of procedures producing a blended version of the frames you’ve selected. It does an outstanding job. It uses Layer Masks(see image below – layer masks are the black and white shapes to the right of each layer in the palette at left of the image) to obscure the irrelevant portions of each frame, and heals the edges allowing them to blend more seamlessly together. So the process is non-destructive to the pixel data in each frame. You may go back and re-work by hand what the computer suggests – which I’ve found seldom necessary as long as each frame is exposed properly and overlapped enough during shooting.

A valuable feature is the Geometric Distortion Correction. Each lens has a varying inherent amount of geometric distortion to it. Depending on the lens and its design, this will either be a large amount or small amount – but some distortion is unavoidable. What’s nice creating such wide images this way is the ability of the computer to go through each frame and minimize such distortion so the resulting image is as “true” as possible. I wonder if a lens were available to make such a wide exposure in one frame to avoid the panoramic stitching – if it would suffer due to the extreme distortion such a wide field of view would introduce. In some respects then, I wonder if one obtains a truer image using this 5-frame method with a normal focal range lens (50mm) – than attempting to do one shot with a super wide-angle lens? Just a thought.

Once the image is assembled, typical scan-retouches are all that’s usually required. Removing dust and scratches, making sure the black and white points are set properly, then cropping/framing the final image. Below you can see the original results of the merge. The final image is cropped to straighten out the top and bottom of the frame – indicated by the light blue guide lines. This is where using a tripod comes in handy. The straighter the images are while panning during the actual exposures, the less waste there is at top and bottom. In the image below you can see to the left of frame there’s more white space on frame top. I was hand-holding the camera which prevented a more precise alignment. 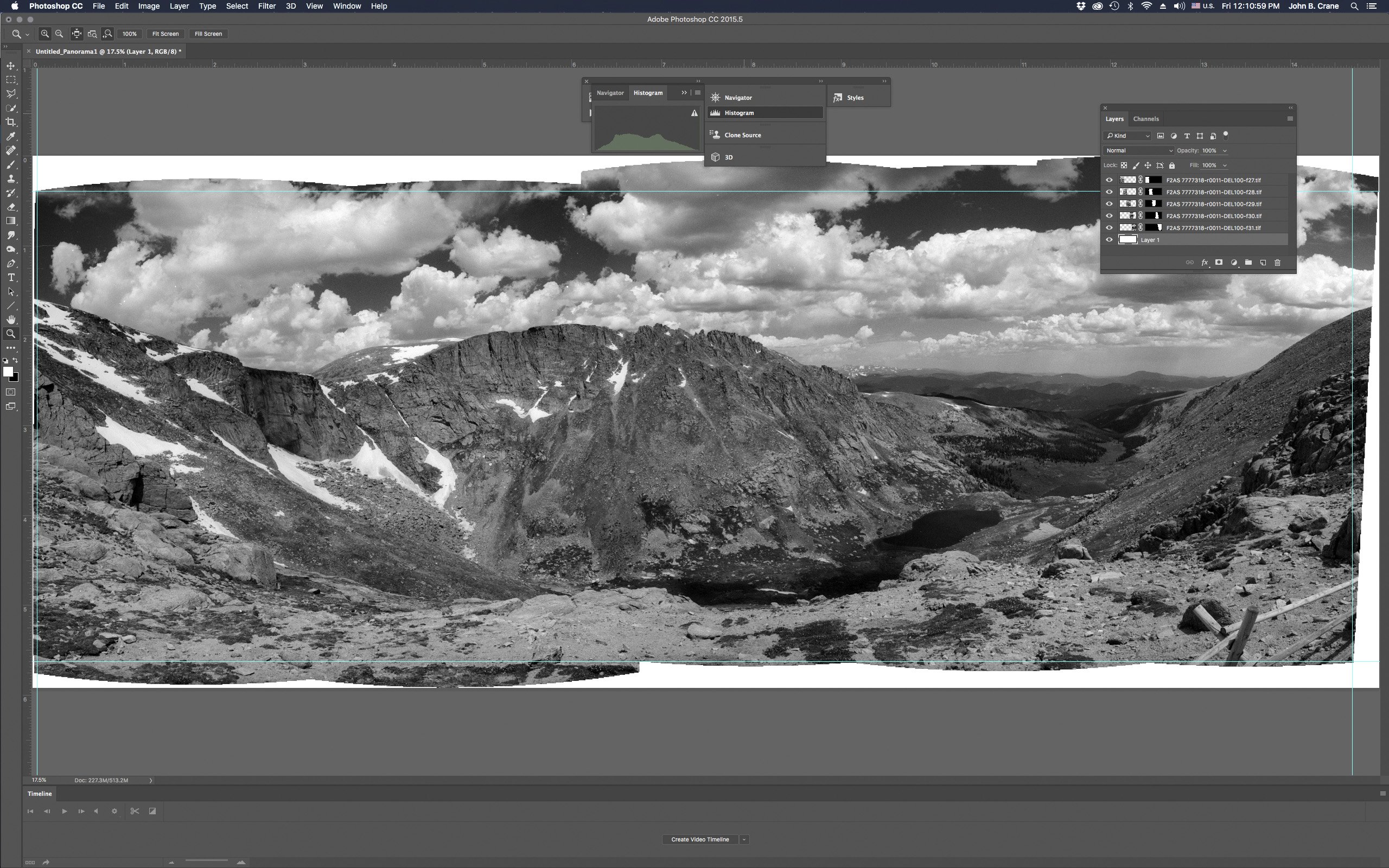 I get such a kick out of this process is it demonstrates – once again – what a unique period we’re enjoying in the history of photography. Years ago when 35mm film was available but software was no where near its present level of sophistication – this would have been impossible to accomplish. Today, using old school tools and new digital methods of processing, creative floodgates have burst open allowing so many different ways to blend these two schools of thought together. What a wonderful time to be a film photographer.