because this is, after all, a journal…
(I don’t know why the image above is cropped like that… kinda drives me nuts. Below is what it should look like). 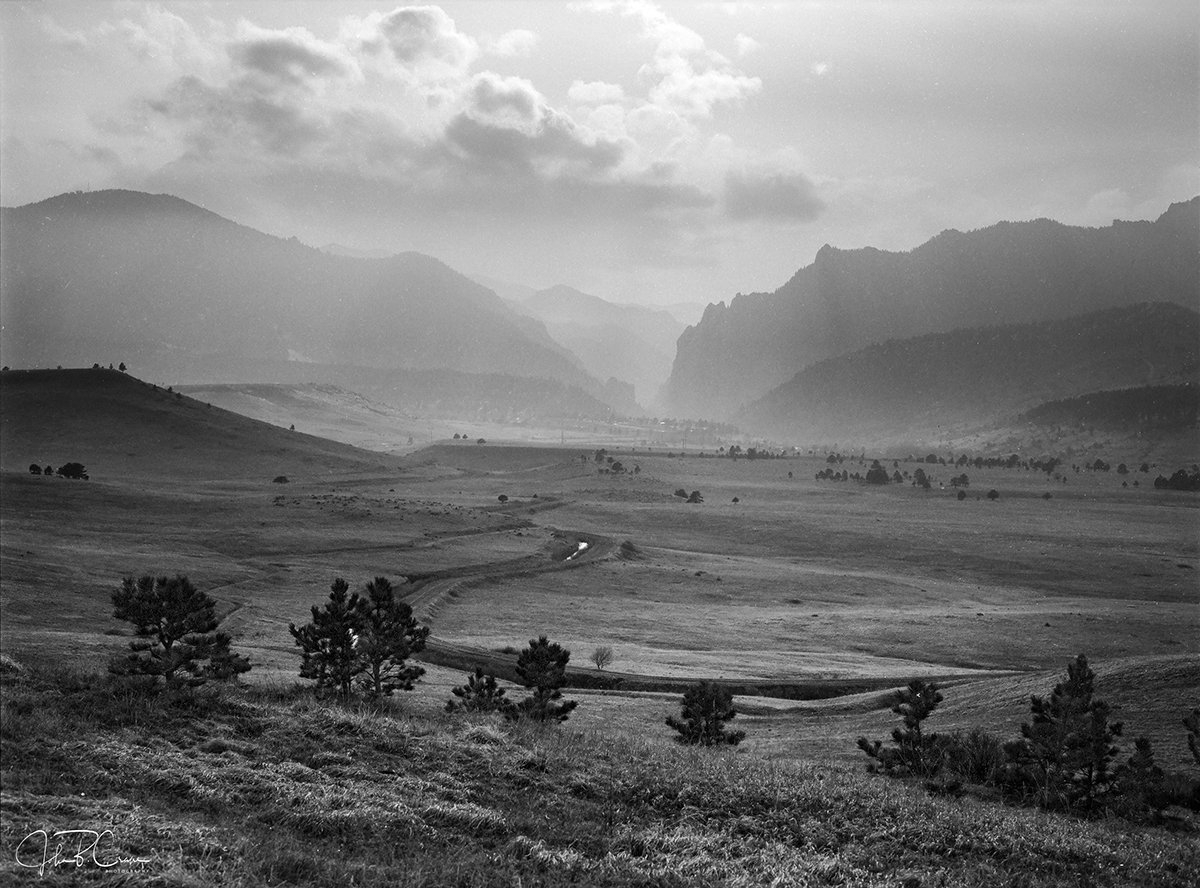 Saturday – out driving around literally all day, looking for a photograph. I went to Denver to pick up some more Delta 100 at Denver Pro Photo. Leroy said he’d hold a 10-pack for me earlier in the week and their prices are pretty good when you buy in bulk. Not that 10 rolls is ‘bulk’ bulk, but it’s good for 10% off, making it closer in price compared to mail ordering from B&H. I’m all for supporting local brick and mortars, as long as they make it close. Mike’s Camera in Boulder isn’t close. They’re far too expensive, especially for film. But DPP is great: reasonably priced, well stocked, and I’m happy to help keep them that way. I appreciate vendors who have things in stock when you need them and don’t have time to mail order.

Lately I-25 – especially Saturdays – has turned into a parking lot, taking nearly 2 hours to travel the 60+ miles from Fort Collins to Denver. Yesterday I decided if I were going to spend two hours in the car traveling to Denver I wasn’t going to do it white knuckle worrying about rear-ending – or – being rear-ended by someone on I-25. Instead I’d take the long way down, closer to the foothills, traveling slowly on county and even dirt roads to see what I could see.

I eventually made it to ‘town,’ spent a few minutes in the shop then headed out, stopping by the Wendy’s on the corner of Grant and Broadway for lunch on the drive back. My eyes were constantly looking for something – anything – on which to spend the few frames of Pan F I had loaded in the 645. Light was flat and I just wasn’t feeling it. Traveling through Littleton and making the right on Santa Fe to head north – towards home again – I noticed the light. There had been a storm through Colorado Friday night depositing a lot of moisture which was burning off in the form of steam as the sun began to peek through breaking clouds. Turning onto West Colfax (I absolutely love the vibe of West Colfax – someday I’m going to photograph it) heading towards the Golden and the mountains again I felt my shoulders and grip on the wheel relax.

Out of Golden I decided to run up to Golden Gate State Park and see what I could see. It’s still early season up there, with snow and mud covering much of the back country. The primary roads through the park still closed, I wandered back down to 72 on Gap Road, covering the bottom of the Subaru in mud. Gap Road fed into Coal Creek Canyon and the descent to Hwy 93 looked promising. As the cloud blanket covering Colorado’s Front Range finally began to clump up and create holes – intense light was hitting the high cliffs near the bottom of the Canyon. There was no shot, but I felt my spirits lift. I hadn’t made a frame all day, my kit sitting next to me on the front seat, the seat belt strapped to keep that annoying seatbelt alarm from going off beneath the weight of the pack.

A left onto Hwy 93, heading north towards Boulder and things were really looking up. To the west I could see the clouds continue to clump – creating larger holes revealing not quite blue sky, but something close. The angle of the sun was improving and there was still plenty of daylight left. It was about 5:30 when I hit the top of the hill on 93, just south of the turn off to Eldorado Springs. Looking west I saw something begin to unfold and my foot hit the breaks. But there was too much traffic to turn off safely so I continued down the hill, made the legal turn around in the gas station then headed back up the hill to a safe pull-out. The next 45 minutes were spent watching what I’d been looking for all day.

The mix of haze and fog and steam of the day was burning off and the light had begun to grace everything below it fell upon. It was supernatural. Beginning with the already mounted 80mm, the light was just what I wanted. I was spazzing out a little because the light was perfect at that moment, but I still had to set up. I got the tripod out of the back, then fumbled through my pack and found the red filter, then the Graduated ND. The sky was bright – but there was no direct sun. I wanted to use the accordion shade but couldn’t with the filters mounted so held a make-shift sun shade above and in front of the lens, out of view of the frame to try to block any extra light that might cause flares. Focus at infinity. I’d forgotten my cable release so used the 645’s M-Up lever – then tripped the shutter with the timer. 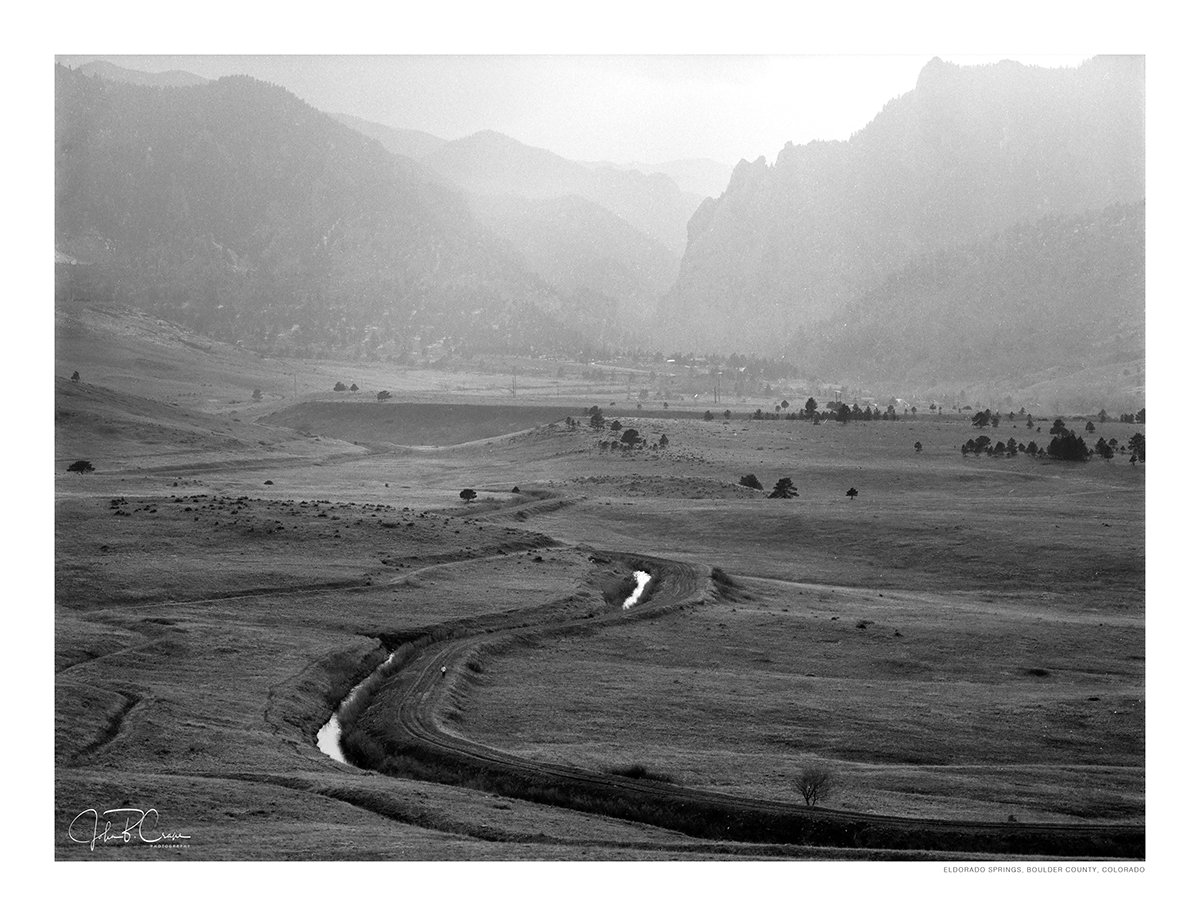 From then on I began experimenting with different compositions, moving around to either include or exclude various elements from the foreground. I mounted the 150mm lens next, transferring the filter set-up from the 80 and made a few more frames. In the distance I saw a light shape moving through the bottom of the frame. A runner was making her way toward the mouth of the canyon. I waited until she got to about where I thought would look nice then released the shutter a few more times. I especially liked the bright glints of water in the irrigation canal snaking its way toward the mouth of the canyon. 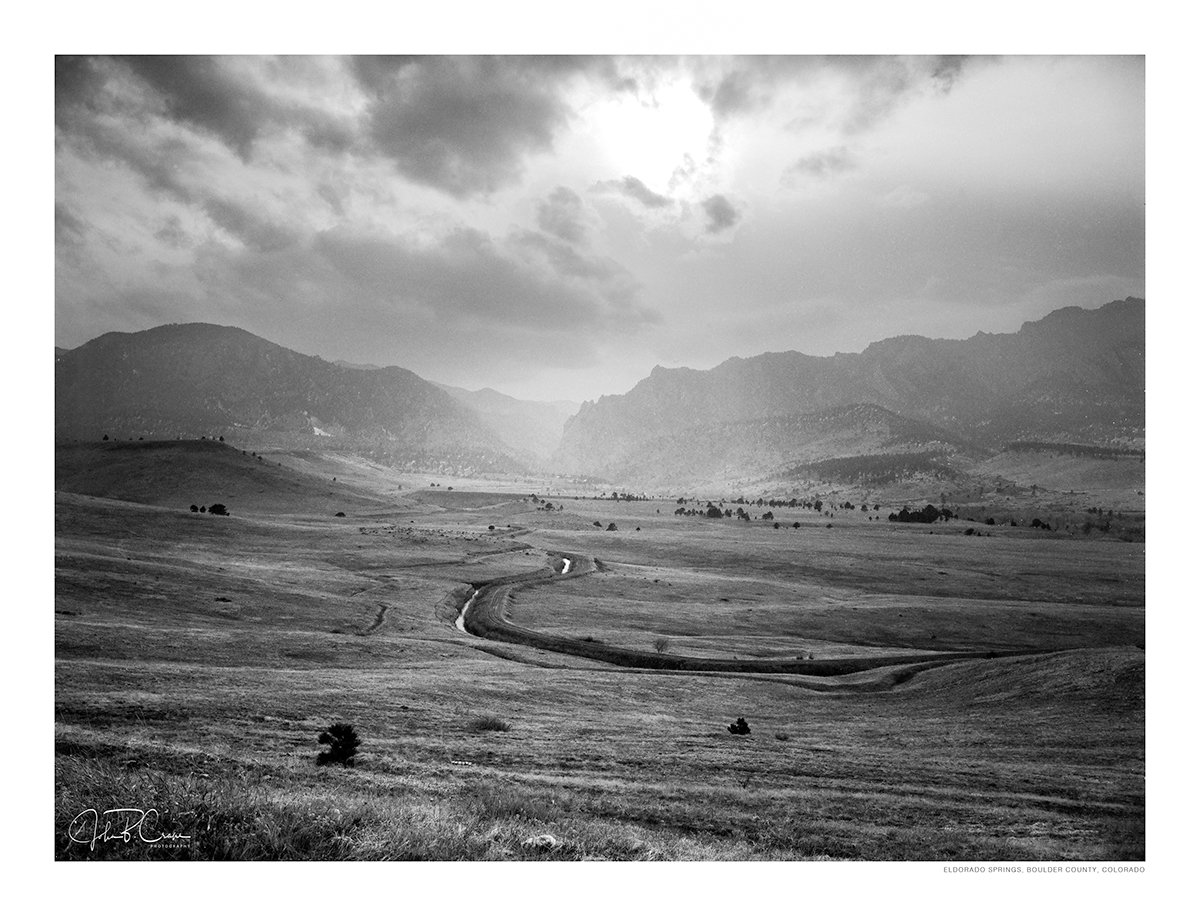 By the end, the light was diffusing a little too much and while still pretty, lacked the punch of earlier frames. None the less, I mounted the 55 and made a frame with it as well, just for posterity.

The take away: since moving from digital back to film a good many years ago I’ve developed different habits that I believe help me see better. Photography is, in many respects, a lot like fly fishing – another of my favorite things. Both get me ‘out there’ and both cultivate and reward patience and discipline. The next step in my journey is moving fully back to the darkroom to print, but there are a few logistical obstacles preventing me from doing so at the moment. Namely the extensive washing required for fiber based papers. Water is a hot commodity here in Colorado and I want to be responsible with it. We’re working on a solution for that… more to come.