New Mexico 2018 (a non-linear creative pick me up) 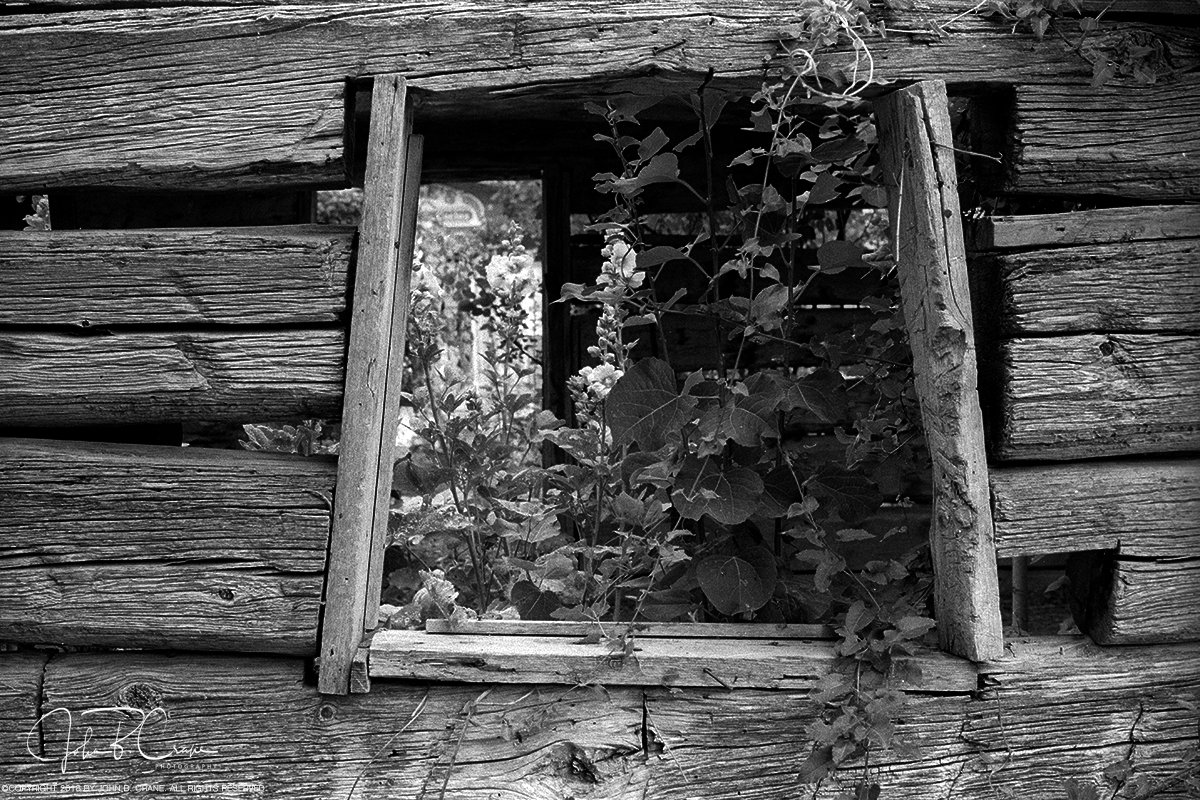 frame 12-Arroyo Seco, New Mexico (2018). This log cabin is connected to the Arroyo Seco Mercantile. Once a settler’s cabin, it has been relocated to Arroyo Seco and turned into a garden spot with hollyhocks and other local flowers.

This past summer my wife and I spent a week in Santa Fe, New Mexico for our 24th anniversary. Having lived in Santa Fe for the first 5 years of our marriage it’s always a special time to return and reconnect with the ‘Land of Enchantment’ and ‘The City Different’ (Santa Fe’s unofficial nickname). 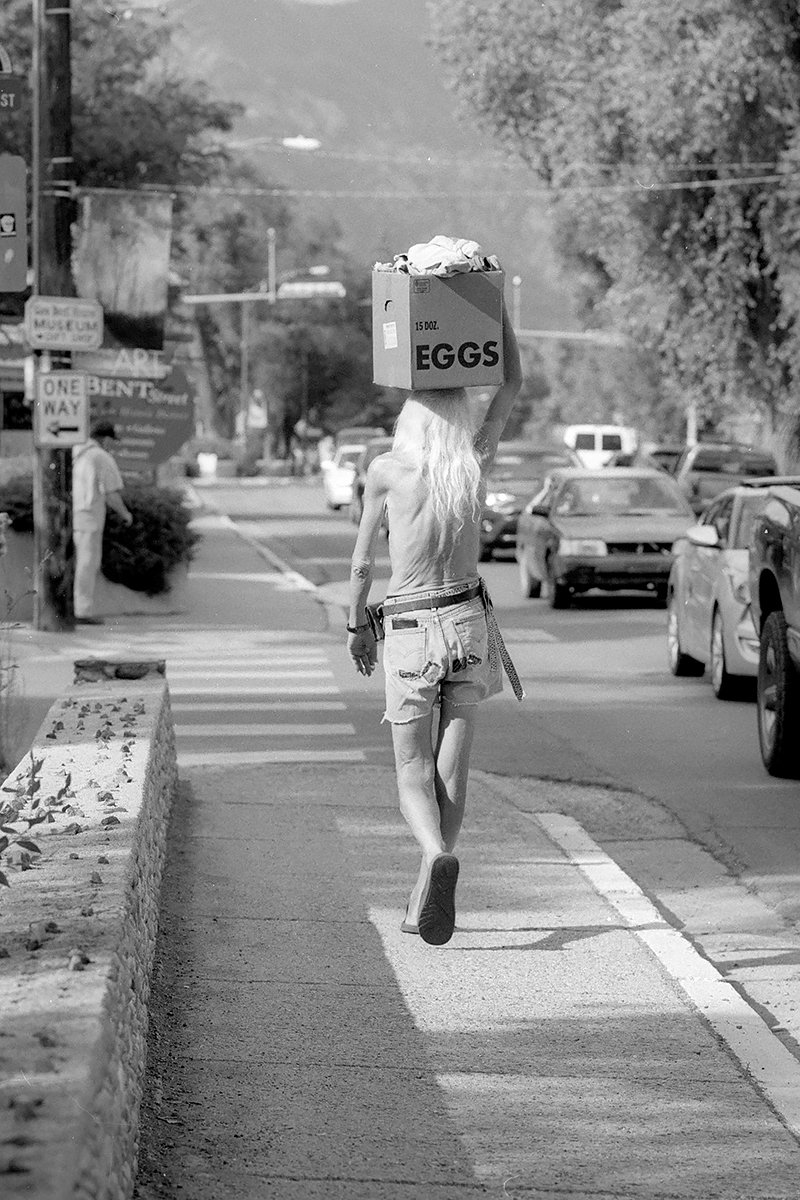 While living there 20 years ago I was in a bit of a dormant photography phase, not  shooting much – and when I did – would squirrel away my films to be developed at some later date. These days when I have opportunity to visit I’m eager to make up for lost time, seeing with fresh eyes some of the unique attributes of the area.

I say unique with a bit of tongue in cheek. New Mexico really is a different kind of place. The people, the land, the culture… it’s not your typical U.S. state (if there were such a thing). New Mexico is an epicenter of creative, unconventional types looking for a place to be, well – creative and unconventional; be themselves.

And then there’s the art. More than you could ever process. It’s everywhere, in all shapes, forms and sizes. 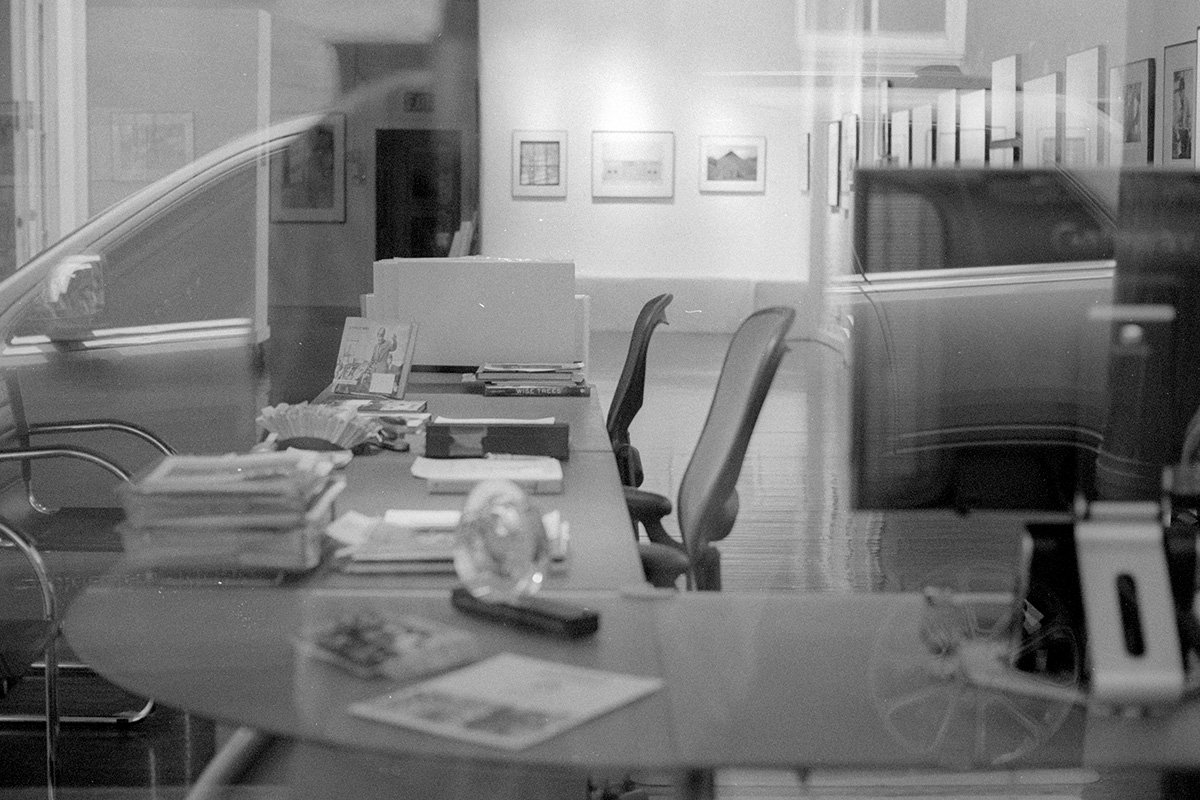 Any photographer visiting Santa Fe absolutely must make a trip to the Monroe Gallery top priority. Located a few blocks off the plaza at 112 Don Gaspar, the Monroe Gallery of Photography specializes in classic black & white photography with an emphasis on humanist and photojournalist imagery. The gallery features work by more than 50 renowned photographers and also represents a select group of contemporary and emerging photographers. 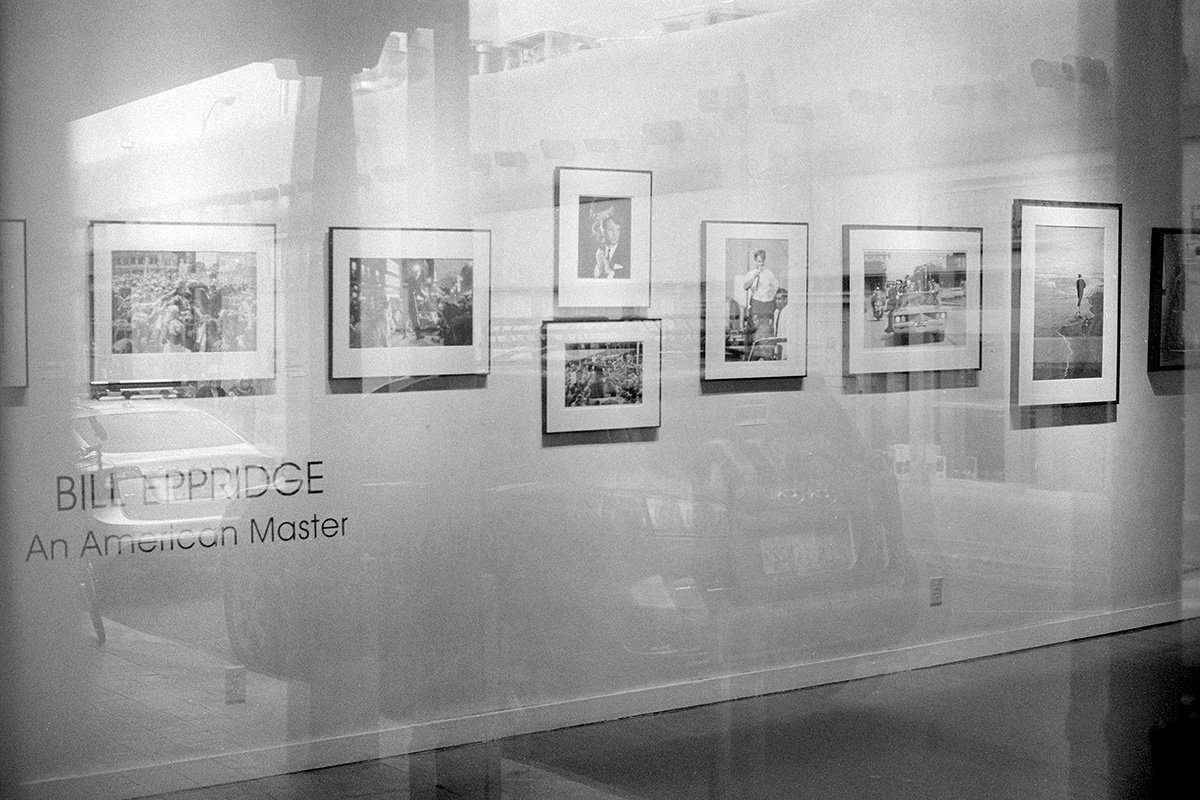 This past visit they featured an exhibit by photojournalist Bill Eppridge including a photograph of Senator Robert Kennedy’s assassination in Los Angeles that made my wife and I stop in our tracks and cry. It’s been a long time since a photograph has had the power to do such a thing.

I of course have no photos from inside the gallery because that would be gauche. It can be a little dicey – photographing art. Talented artists have poured their hearts and souls into what they do. Photographing the results shouldn’t be an attempt to then somehow pass it off as the photographer’s own art – but instead to share  – even promote the work of these talented artists. Go see the work at the Monroe Gallery for yourself. I promise you’ll be glad you did. 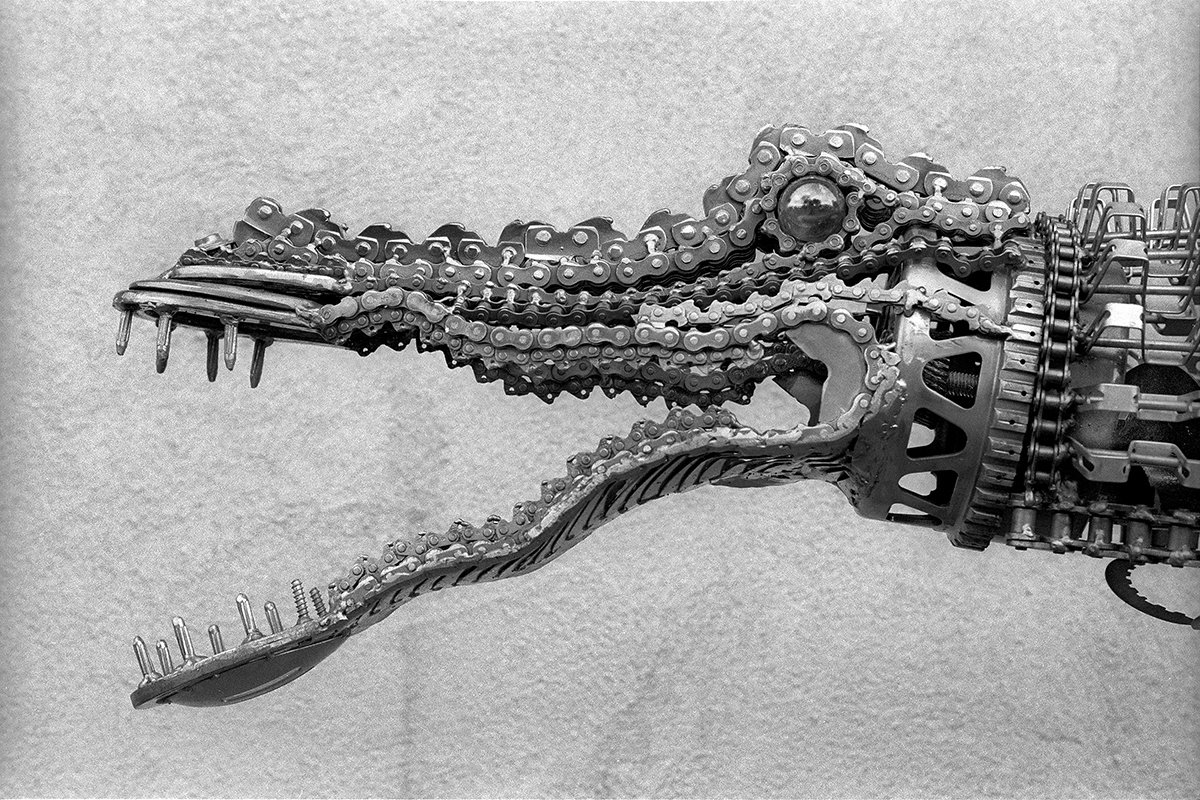 Another of our favorite things to do is walk Canyon Road, where there’s a regular rotation of art on display often right out in front of the galleries, easily accessible. Different times of day bring different light and morning, afternoon or early evening you’ll get something a little different each time.

4 of a series of 7 wooden archangels, carved in 2005 by Jose Lucero from old cottonwood tree trunks lining the Santa Fe River Park along East Alameda St. These slightly larger than life sculptures were inspired by a Mexico City etching from the early 1700’s. 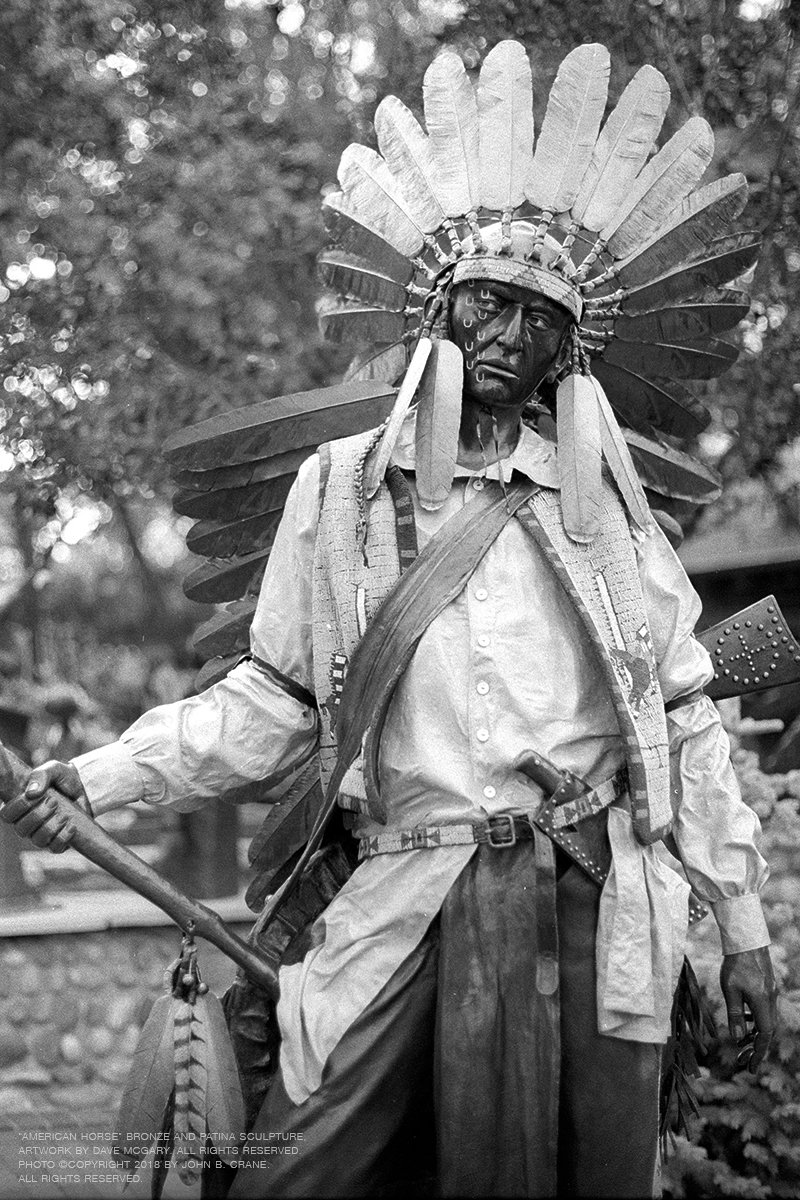 When ever possible I like to ask permission before photographing art. In nearly every case my request is met with an enthusiastic smile and “of course… and thank you for asking.” Such is the case with American Horse by the late Dave McGary, shown at the Meyer Gallery. To stand before this larger than life work of bronze with patina and paint is to visually ingest a level of unfathomable detail. Born in Wyoming, sadly, Dave passed away October 11, 2013 at the far too young age of 55. He left behind a body of work that has to be seen to be believed.

Truly a spectacular sculpture, with hand-painted everything, down to the intricate beadwork in the vest, belt, shoes, etc. The head dress flowing down his back is equally impressive, shown below.

The Meyer Gallery is a special place. If you ever find yourself in Santa Fe do visit. I was met by very gracious and helpful people. 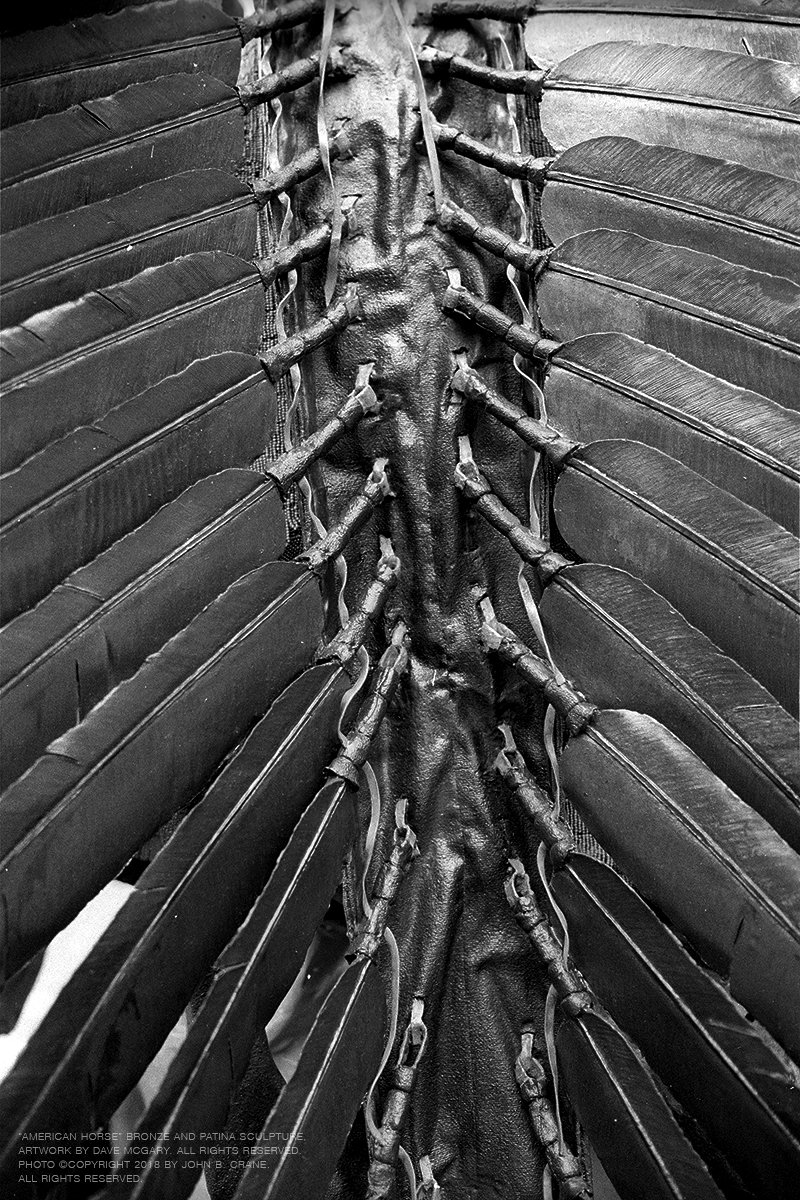 Such was the case with the sculpture below. It was late afternoon and he was behind a ‘closed for the day’ iron gate. The spaces between the posts were just wide enough to fit my lens through at such an angle to present a clean and evenly illuminated background – making this sculpture really stand out from its grossly unflattering, hidden in an alley surroundings.

(It kills me I wasn’t able to record the name of the sculpture, artist or gallery for this shot because the gallery was closed. I’m working on it though, and will attribute when I have the information.)

You could easily spend half a day walking Canyon Road to take in some world class art. Who knows… you may even use the opportunity to polish your portraiture skills on some of these bronze busts that don’t move, or blink – or complain you’re taking too long to snap the picture. And it doesn’t cost a nickle. 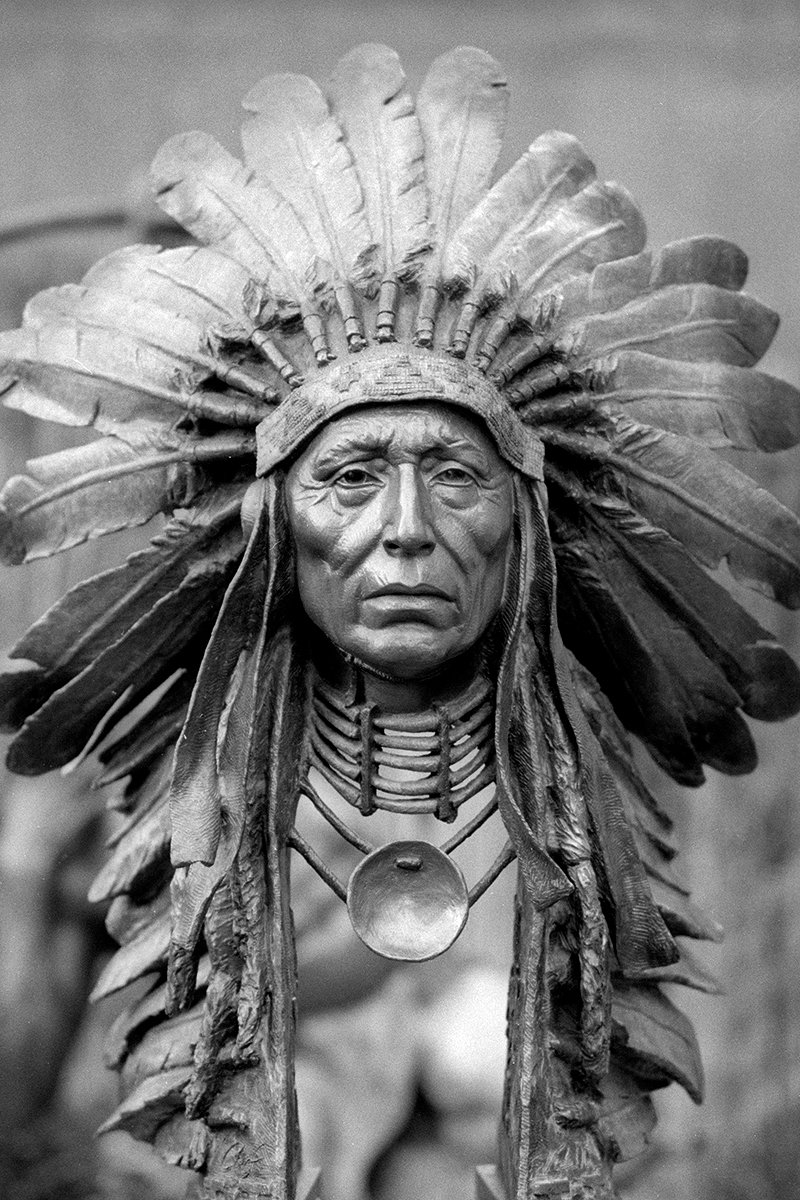 For whatever reason when I return to New Mexico there’s an overwhelming desire to shoot black and white film. Odd, when you consider the intense, (super)natural color all around. Buildings, artwork, all possessing a general style and colorful flare begging to be photographed in always changing light. Then there’s that dramatic natural lighting of sunrises and sets. So I run color film too. But the frames I’m most interested in upon return are the black and white. 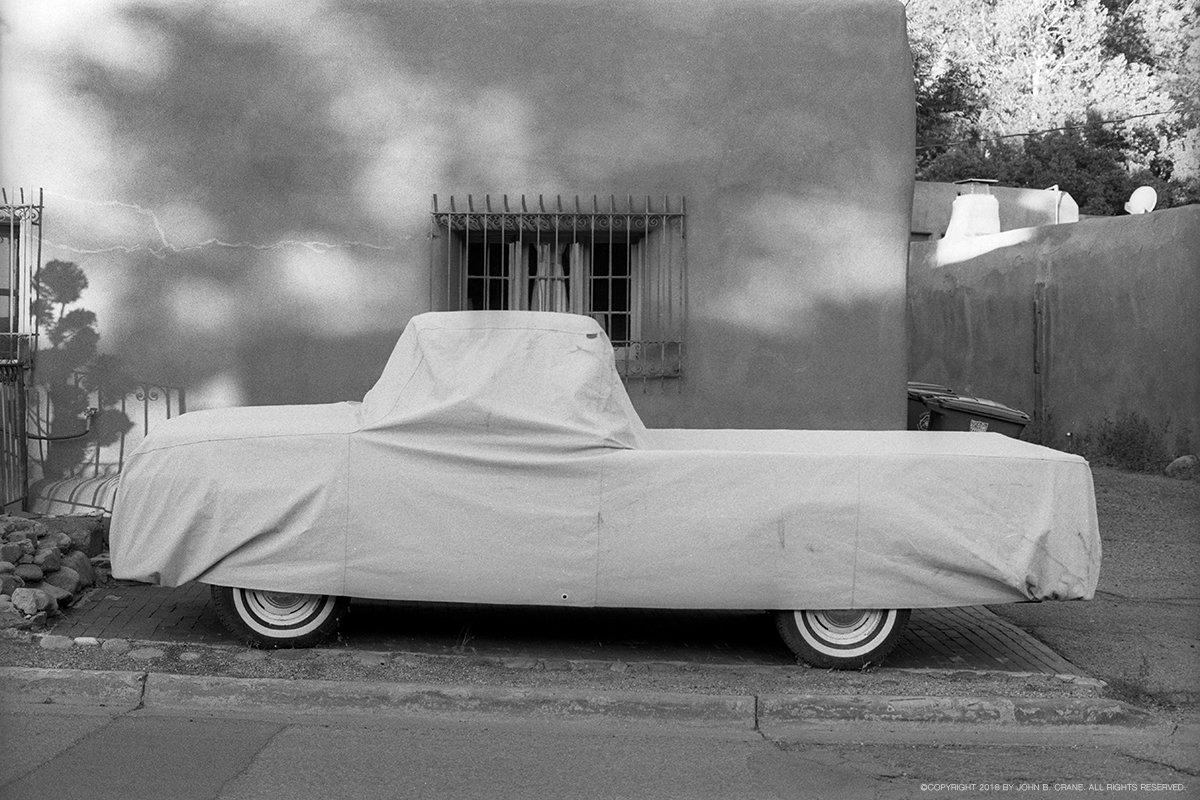 I’m back to sending my color films out for developing (The Slide Printer in Denver), but now (and for the past 3 years… has it been that long?) always develop my own black and white – using Ilford chemistry with my Ilford films. Nothing at all against the Kodak products (which I use extensively for color work) – but Delta 100 is it for me;  the end of the search for my perfect black and white film. And there’s no better developer for the Delta T-grains than DDX. 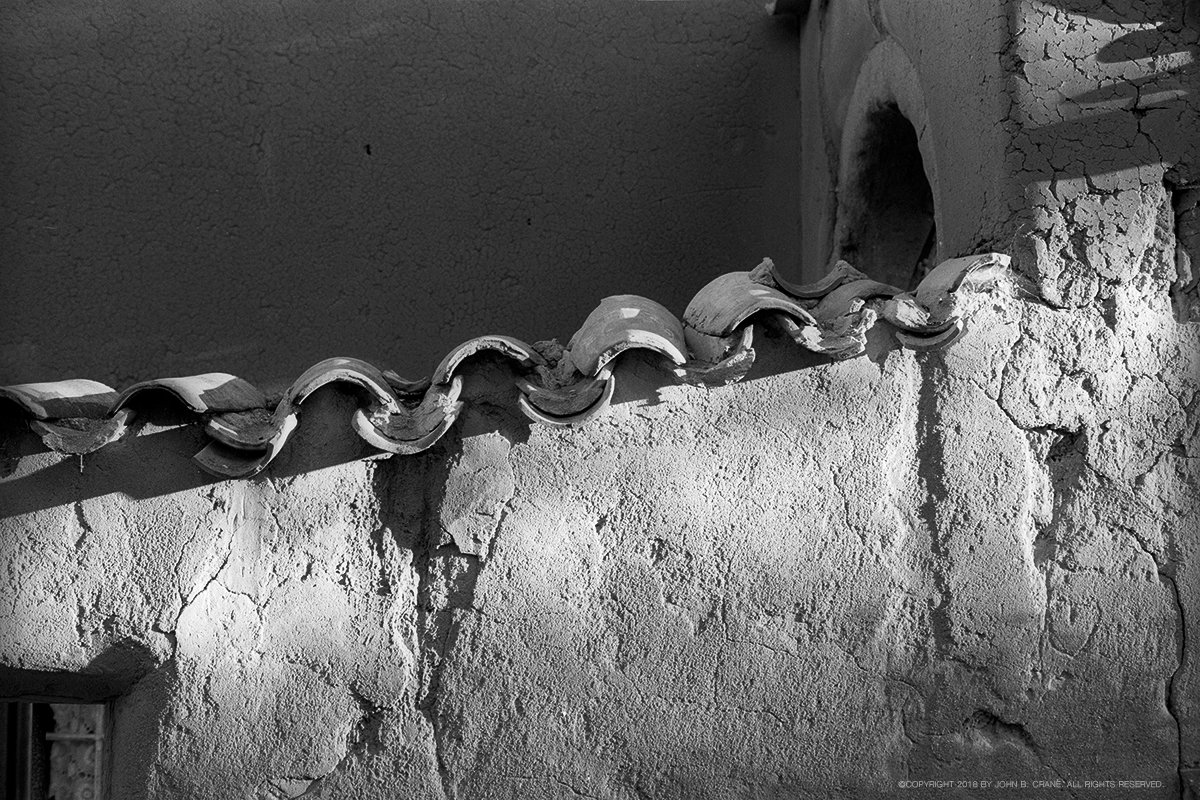 Even still there are some practical limits when it comes to hand-developing any quantity of films after a trip. After a busy summer I’ve only recently had the opportunity to dive in to this latest cache of exposed film. And as the cooler, darker months of winter descend and I drift back into the printing phase of photography’s cycle, it’s fun to watch images made months ago magically reappear in the trays. It’s a little like Christmas. 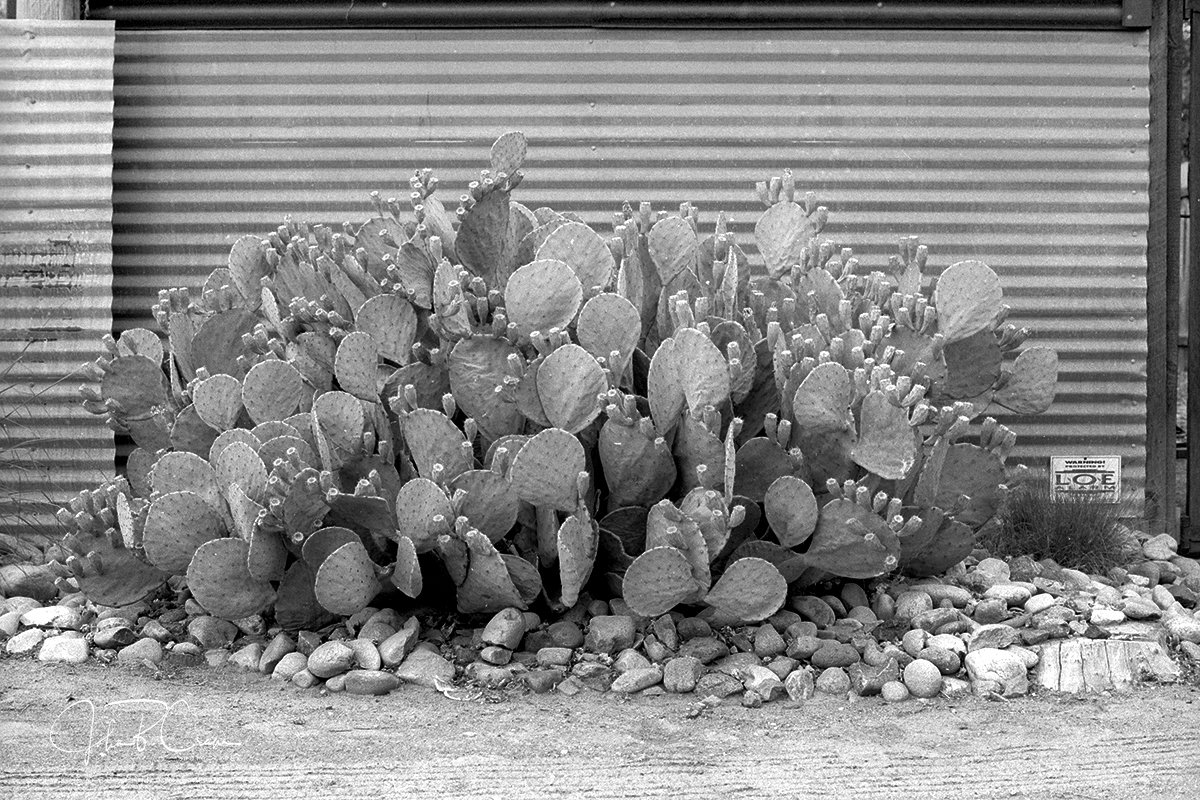 The hope is, after the vacations are over and you’ve settled back into the regular routines of life – these photographs provide a pleasing afterglow with which to remember the trip. A quantum shift from instantly viewing and sharing photos from your phone. 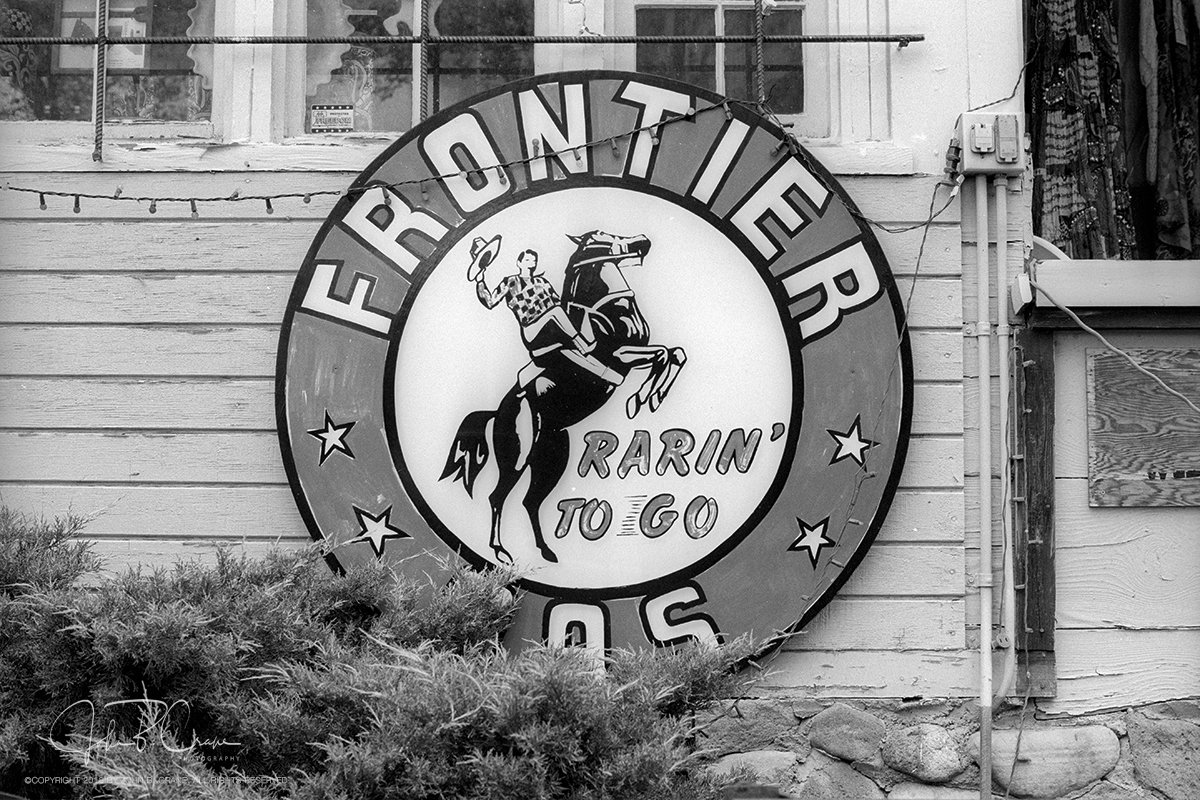 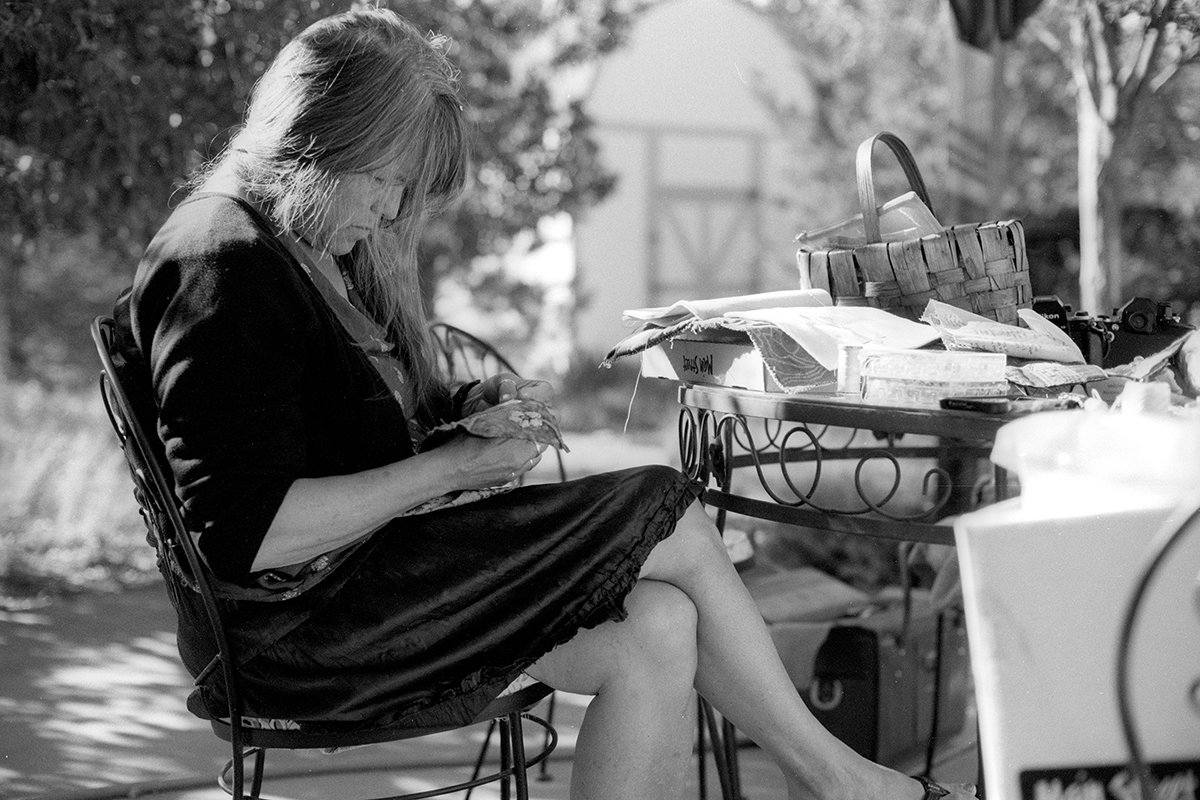 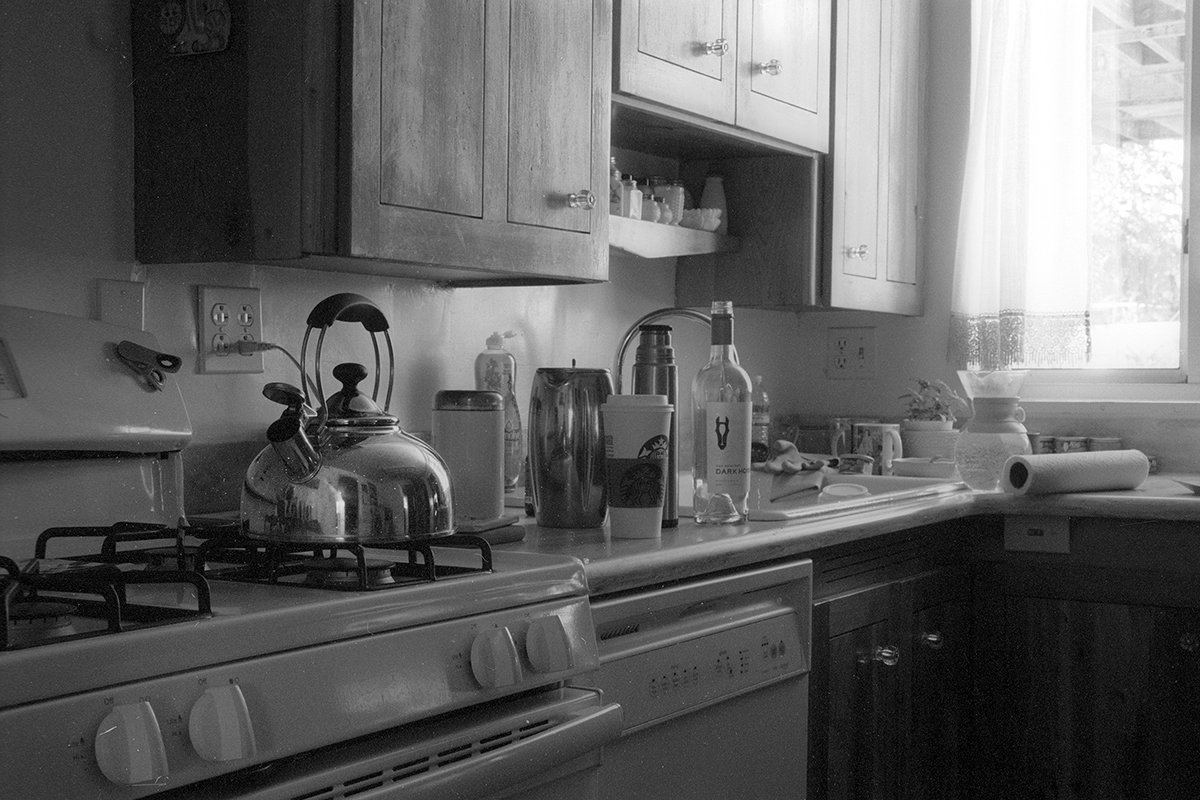 And icing on the cake – while in Madrid one day we encountered a lovely group of three women wanting their photograph made to commemorate their trip, resulting in my first darkroom print order in a while. 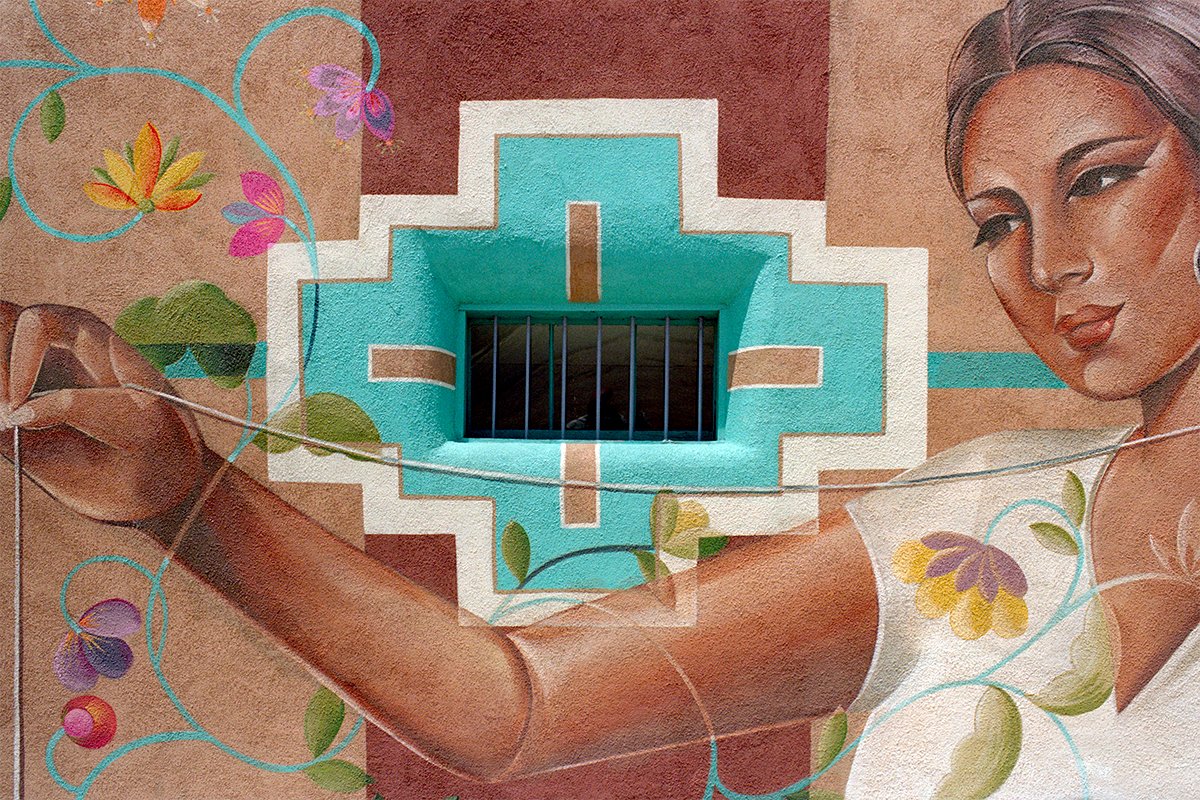 Santa Fe and northern New Mexico are epicenters of creative thought. There’s no doubt the 5 years we spent living there helped shape my creative thinking. Though Colorado is now home, we return each year to the Land of Enchantment and “The City Different” for a little creative pick me up.

Mural, San Luis, Colorado. Atop the border of New Mexico and Colorado sits San Luis, registered as the oldest continuously occupied town in Colorado. Though its physical being lies within Colorado’s borders, its Spirit is almost entirely New Mexican.

Post Script: One of the primary purposes of Blue Hour Journal is to express creative efforts that don’t easily align with other efforts or directions.  In the past there’s been a pull towards things to ‘make sense;’ logistically, practically… to ‘have a point’ and build towards some larger narrative reinforcing that point. Case in point, I just realized that many of the photographs posted in this article are of Native American Indian art. That wasn’t the focus when I sat down to begin writing. I suppose somehow though it’s a natural reflection of what consistently attracts my attention while visiting Santa Fe.

That said, I’m actively resisting the temptation to knit together – with sometimes the most tenuous of threads –  independent creative thoughts; allowing them instead to stand on their own. No hooks, no connections to anything else. Non-linear. A stand-alone creative thought. That’s the purpose of this blog: to evolve creative thinking and the creative thought process. A place to be free to wander, shoot and dream without it having to make sense. Peace, JBC.

To see more imagery from the trip head over to johnbcrane.com/newmexico