Memphis has been the subject of many a discussion between my son and I for a few years now. We love road trips and just being in the car together, so when ever we’re hunting for a just barely out of reach, crazy destination to spontaneously shoot off to in the middle of the night (from Colorado) – Memphis has been a part of that discussion. Alas, common sense has prevailed and Memphis had remained unvisited – until this past July. As we planned our route to a family reunion in Nashville I was delighted to see Memphis sort of en route on the way home. I tend to drive any place I visit not because I fear flying – though who wouldn’t these days – but because I prefer to pass slowly through places en route to any destination – not zoom over places at 300mph in an aluminum tube with wings. So it was settled: Memphis on the return leg.

It’s hard to determine the origins of my fascination precisely, but strong contributors are Marc Cohn’s “Walking in Memphis,” John Hiatt’s “Memphis in the Mean Time” and of course the father of color photography, the incomparable Mr. William Eggleston – one who unbenounced to him – was instrumental in helping me shape and refocus how I approach the art of color photography. Elvis and Graceland may have a little something to do with it too, but not being quite as ardent “King” fans, they’re certainly not the strongest draw. 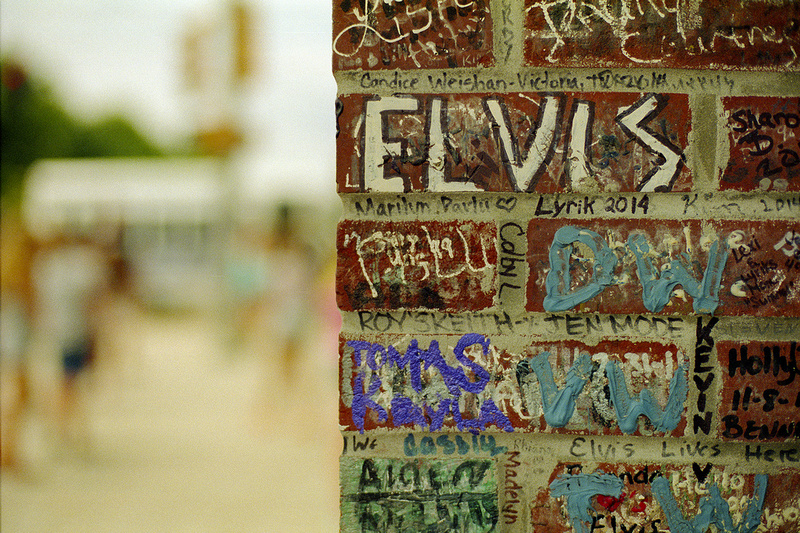 Graceland is Elvis’ old home and no trip to Memphis is complete without at least a drive by. We didn’t feel the need to go in – but were a little curious. Vans jammed with people cruised in and out of the gates while a number of folks simply stood out front by the brick wall surrounding the estate. My wife and I agreed it was a little creepy – not sure how else to describe it… The wall was very interesting to me, containing “high-school yearbook” style insignias and drawings of Elvis along its 100 yard length. I walked it several times marveling at the influence this one, charismatic man had on so many people in his life cut short. 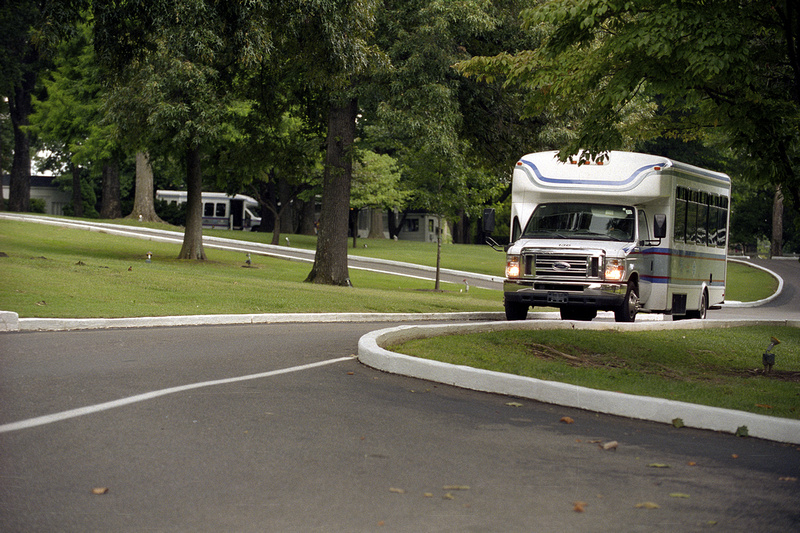 Graceland bussing people in and out of those fabled gates for a peek at Elvis’ mansion.

After Graceland we headed into the city center. It was a sunny, hot Sunday afternoon and we found a place in the shade to park near the bottom of famous Beale Street. As is usually the case on trips like this I’ll have my D3s and bunch of other gear buried beneath blankets in the car to keep everything cool, but leave it all in the car, choosing instead the F6, a 50mm ƒ1.4D and  some Portra 400 to carry while I wander. I like to minimize attention while shooting as much as possible, and carrying a lot of gear gets uncomfortable – especially in the heat. While it’s true there are times were a few extra frames would be nice to have – I find I focus much more intently while shooting when I’m working with a finite number of shots. Something I’ve discovered after years of editing – I hate sitting in front of the computer after a trip trying to decide which one of 10 or so images in a burst is the “best one.” I’d much rather decide which the better image is while shooting. This requires patience, and being willing to pay the cost: sometimes being wrong and missing a shot. The benefits include more finely tuning your process to identify and take advantage of opportunity. 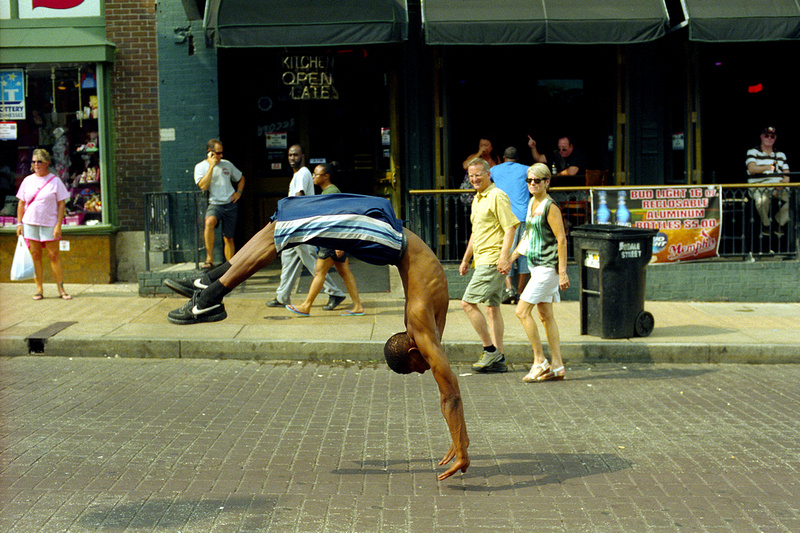 The street flipper is a great example. There were two young men providing the afternoon’s entertainment, flipping down the gently sloping grade of Beatle street. Amazing, actually. I stopped and watched the first guy and overheard another young man walking past me saying to his girl friend, “yeh, I’m pretty sure I could do that…” I thought it would be cool to get a shot of him in mid-flip, hopefully in the air, so I walked up the street a bit and found a good spot. There were trash cans lining the street, and the one across from me was brightly colored, different than the other, black trash cans. I didn’t want it to be the brightest spot in the frame and distract from this guy’s athleticism as he flipped through the frame, so moved up the hill just a bit more. Working with the 50mm produced a lot of background that I couldn’t control. I could minimize it though by shooting as shallow as I could, and ƒ4 provided me with 1/1250 sec. shooting Portra 400 at ISO200. Plenty fast to stop the guy in mid-flip were I lucky enough to time it right. Focus might have produced a problem at this point. Acquiring focus as the flipper flipped through the screen wouldn’t be feasible (he was a fast flipper), and if I just settled for what the camera wanted to do I’d have been focused on the buildings across the street – making the foreground flipper blurry.

What to do… Here’s where de-coupling your focus from the shutter release is a really fantastic idea – and I think everyone should do it. Because I usually shoot like this I was ready – to dig into the camera’s menus there on the street and fuss with CSM Settings would have taken too much time and attention away from all that was going on around me. In the F6’s CSM Menu, Custom Setting A4: AF activation: “AF-ON Only” allows the camera’s auto focus feature to be activated using only the AF-On button(s – plural if you use the MB-40 grip as I do). The camera’s default setting is “Release/AF-ON” which means if I’d used this setting to pre-focus on a certain point, the camera would try to focus again when I pressed the shutter to make the image. This would have resulted in a blurry image because the camera would have focused on the buildings across the street – instead of the flipper flipping through in the middle of the street. At ƒ4 there’s not much room to miss before the image is out of focus. Not what I wanted. Using the AF-On button I focused on the street in front of me where I suspected the flipper would land, then raised the camera to frame the shot and waited. Almost immediately the other flipper came flipping through the frame and I fired one shot, hoping I got him. A little thought, a little planning and a little camera knowledge goes a long way. 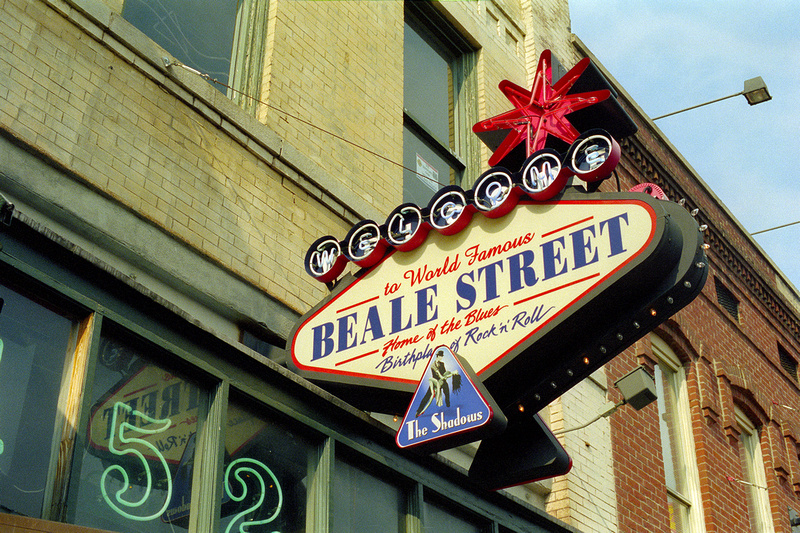 After a little asking around we found someone to point us towards one of the most famous destinations of the area, the Lorraine Motel – where Martin Luther King Jr. was shot on the balcony outside room 306. The Lorraine Hotel has been turned into and maintained as The National Civil Rights Museum for all to come experience. This was one of the most powerful – yet non flamboyant – destinations I’ve visited in recent memory. People hovered around and the air was reverent; respectful – not a lot of goofing around and selfies going on amidst the large group of kids who’d gathered in the shade across the street. The depth to which I was moved at this location was unexpected and we explored for nearly an hour, taking it in. The museum’s doors were open and the air conditioning felt great, and they always appreciate donations to keep the doors open and lights on. 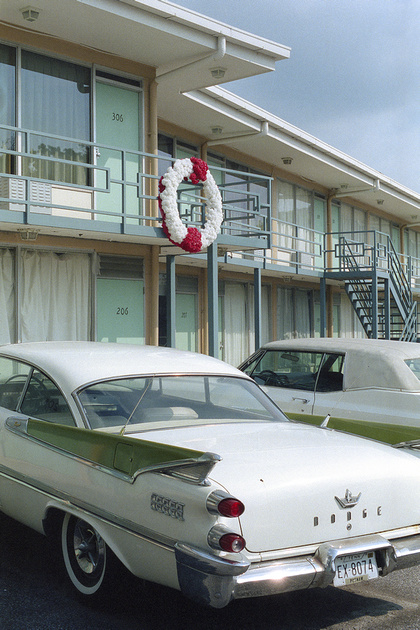 Speaking of the heat, I was a little concerned when I grabbed the last role of Portra 400 from the console of the car. It had become warm despite the AC running while we drove. I put it in my pocket and hoped for the best, and was delighted when processing revealed no issues what so ever. Sometimes I’ll carry a cooler for the film but most of the time I’ll simply protect the stash from direct sunlight and call it good. I’ve never had any problems, even in the extreme heat of the Caribbean. 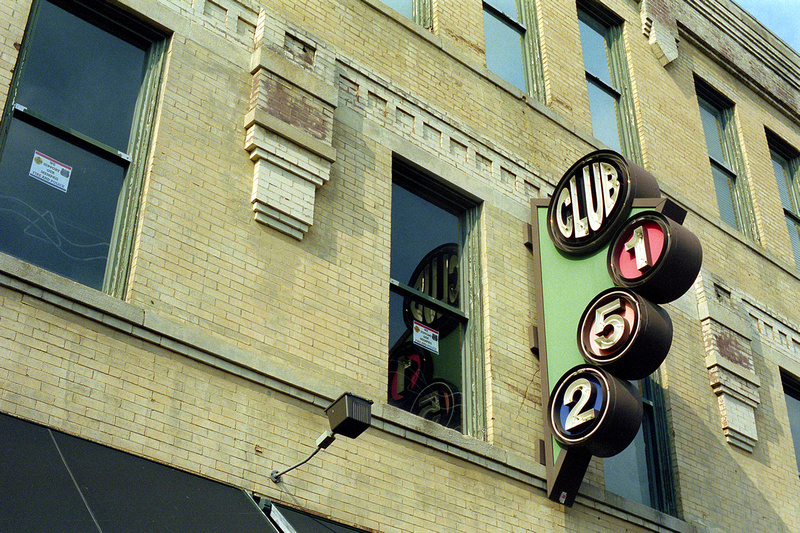 After the Lorraine we slowly made our way back to the car, wanting to savor as much as we could. On a Sunday afternoon there wasn’t much activity outside the Beale Street block and it was nice to casually view the architecture and decor lining our path. The musical legend of Memphis alone is worth the visit, but add to that the food, the culture, the history 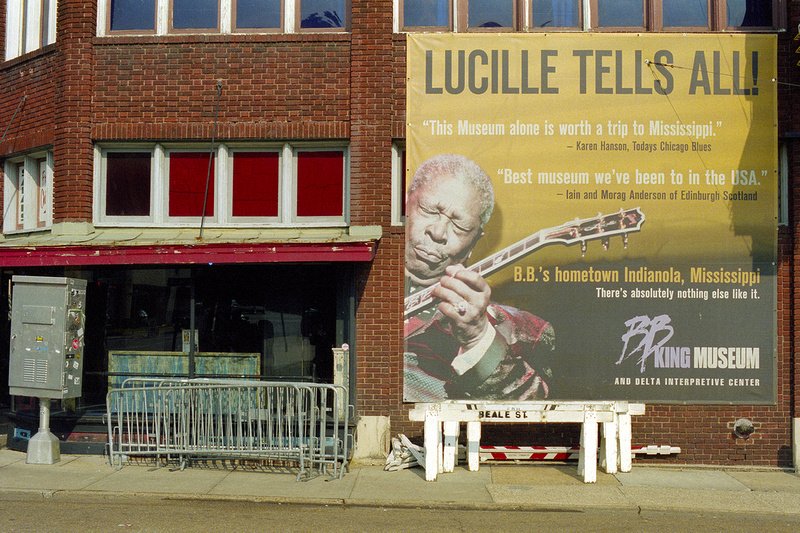 great color and geometry in signage, urban architecture, interesting people, and magnificent night light only serve to fuel my already on fire imagination with photographic potential. It was tough to leave. 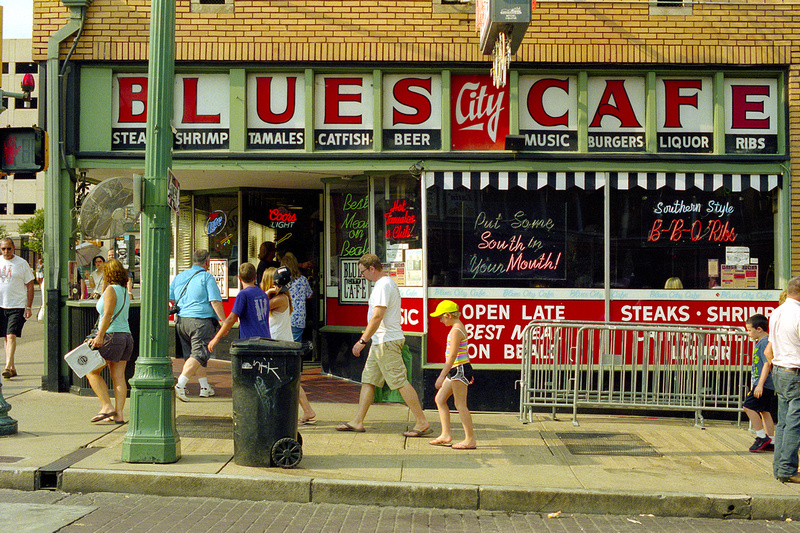 We only had a couple hours in Memphis – hardly enough time to scratch the surface – but I’ll take what I can get. One of the wonderful perks found in driving across the country rather than flying over – it was fun to finally be there if even for just a short time. Hopefully I’ll have the opportunity to return and devote the proper amount of time and attention to such a historically rich city. Happy shooting.