I’ve been wanting to visit Grover since discovering the small, prairie town hiding on a map a few months ago. Located in Eastern Colorado’s Weld County, Grover sits quietly off the more heavily traveled – but still inconspicuous – State Highway 14. If you find yourself in Grover it’s because you’ve chosen to be there. Leaving Fort Collins sometime around 6:30 and doing the math to sunset (around 8:30) I figured I had time to wander out, take a look around in nice light and see what happens.

Images like this are why soon I’ll need new brakes on the car. I’ve learned to drive about 10 miles an hour under the speed limit. Not only does it help save the brakes during sudden stops, it helps avoid animals suddenly appearing in the road. Small animals like birds or jack rabbits will always lose in a confrontation with a car. But antelope – and these guys – well, that’s a different matter. Driving slowly can annoy those behind me who are in a hurry – but I smile and wave as they finally get a dotted yellow line and zoom by. On the county roads leading to Grover there’s no one in the rear view mirror when I look.

Once again, quality of light wins the day. I’ve been thinking a lot about light lately as I’m pouring through hundreds – thousands – of images for 4042n Project. The image above is a great example. An hour earlier this is a completely different scene. An hour later – even more different. I used to stress out about this. I’d wander around with a low-grade anxiety about where I was, and when. Once you understand how subtle shifts in light either enhance or detract from an image there’s no going back to just settling – you’r always looking for that perfect light. But trying to orchestrate every image in perfect light simply isn’t possible. 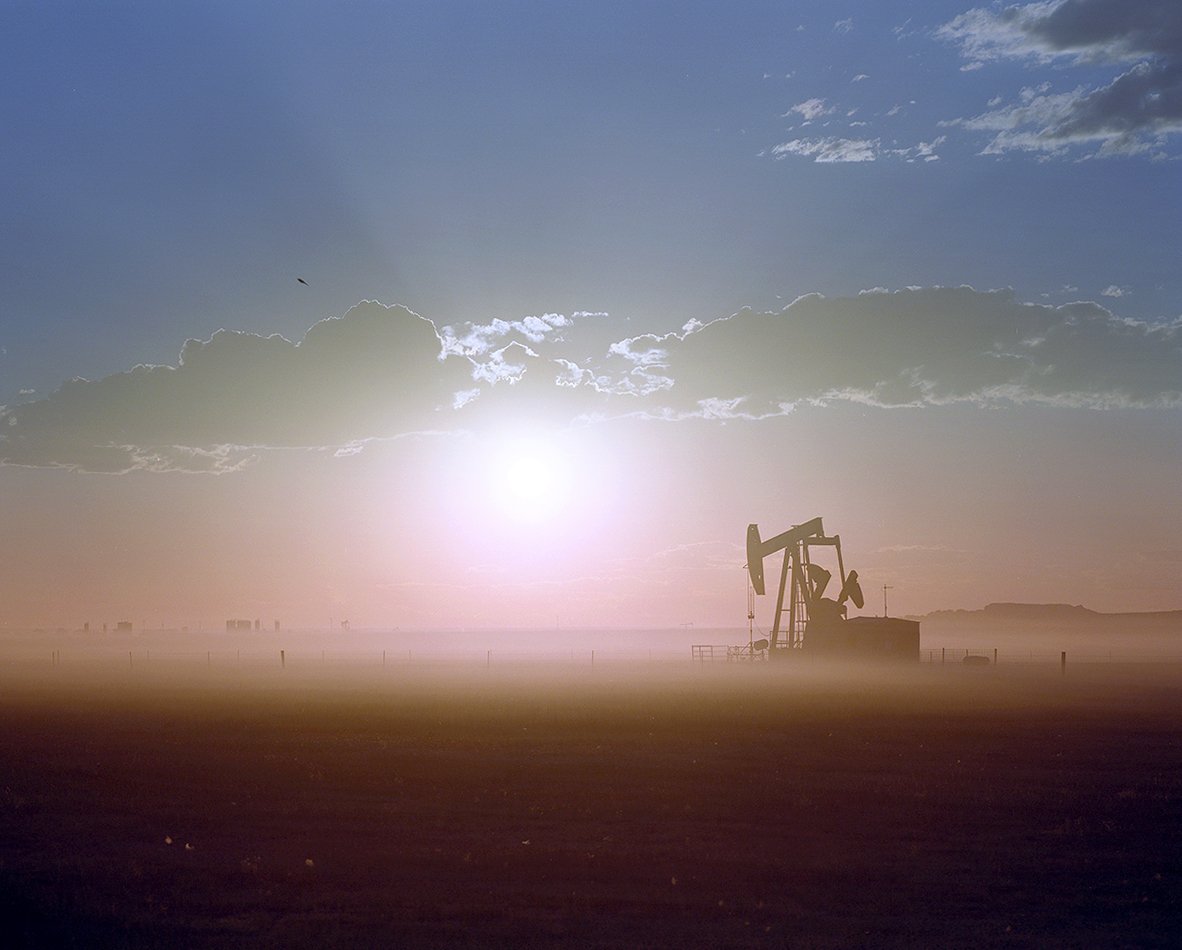 While out wandering scenes often present themselves in poor light forcing a decision – which needs to be processed immediately: is the subject matter strong enough to survive in poor light? What time is it? Is this a strong enough scene I’m willing to stop and wait for great light? Is it worth circling back for later? Would black and white film make this image better? How about filtering? Is the scene 90° (or there about) to the sun’s direction and could a polarizer salvage the sky? Would an ND Grad help or hurt this image? A warming filter? Will the subject still be there when I stop – or will sudden activity scare whatever I’m hoping to photograph away? Is it safe? Does that matter? What lens would create the best composition (I probably will only have one shot at it)? Will a tripod be necessary or can it be hand held? What speed film is loaded into which back? Or – is this one of those images never created as the mind quickly considers these variables at 40 mph and – as a result – the foot never hits the brake pedal. In the case above, the car grinds to a halt in the middle of an otherwise serene, empty, Weld County evening and the dice are rolled.

Often times I have the camera in the front seat, loaded and ready. This time it’s in the back of the car requiring I get out (1 door open and thud – closed), open the hatch back (a second thud in the otherwise serene evening) and by now the bison have stopped eating and are looking at me, beginning to reposition themselves. The light is strong but has begun to diffuse, well en route towards the horizon but sill high enough above to produce the gorgeous quality only it can. Haze hovering above rural lands to the west spreads and colors the light just enough to prevent the harsh, glaring, high-altitude blast so common here in Colorado. It’s just about the perfect time of day for a late-June image here in northern Colorado: between 7:30 and 8:30pm. The bison are curious when I approach as close as I dare. Both arc their tails – a sign of something I’m sure, but I don’t know what. I thought they were going to pee – but thankfully they didn’t (I didn’t want to have to Photoshop that out). I focus the stout RZ67 hand held, and go for broke. Thunk. The bison are now in motion, away (thankfully) as I advance and try two more frames – a bust as the bison march west, towards the light. As the camera swings with them the sky lightens as the brighter, western sky begins to encroach on the viewfinder and I know it’s over. But I think the first frame was a good one. 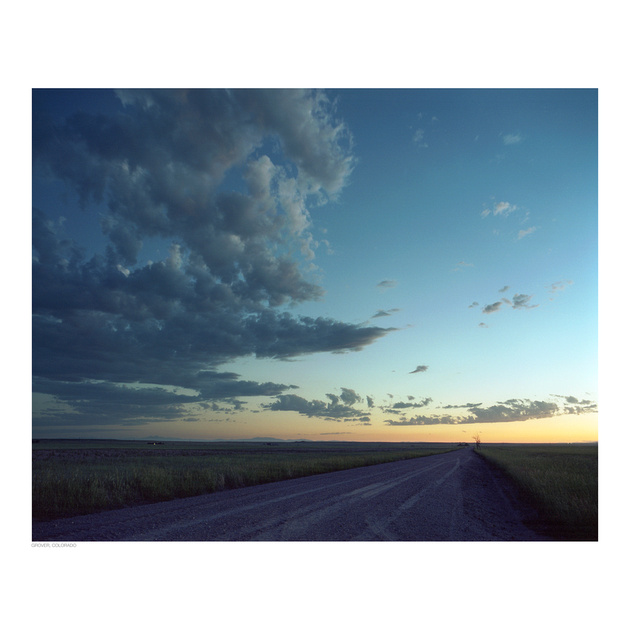 As I packed up and headed into town light quality improved even more. This oil and gas field just out of town was a fascinating site. As far as the eye could see, a fine layer of dust – kicked up by heavy tanker-truck activity along the dirt roads – hovered above the ground. At fist it appeared as a morning dew might; a light haze clinging close to the ground producing an intriguing effect on everything it came to rest on. Then another tanker truck passed and I watched the flow of dust it displaced off the road. It was airborne briefly, drifted a bit in the stillness of the evening, and settled out in the field. When I looked at this image I first thought the foreground “stripes” were caused by banding – a digital artifact created when the tones of the image are compressed too much. Then I checked the negative (this is a medium format film image, not a digitally made image) and saw the foreground stripes in the negative are really rows of dirt lined up in the foreground with dandelion heads. 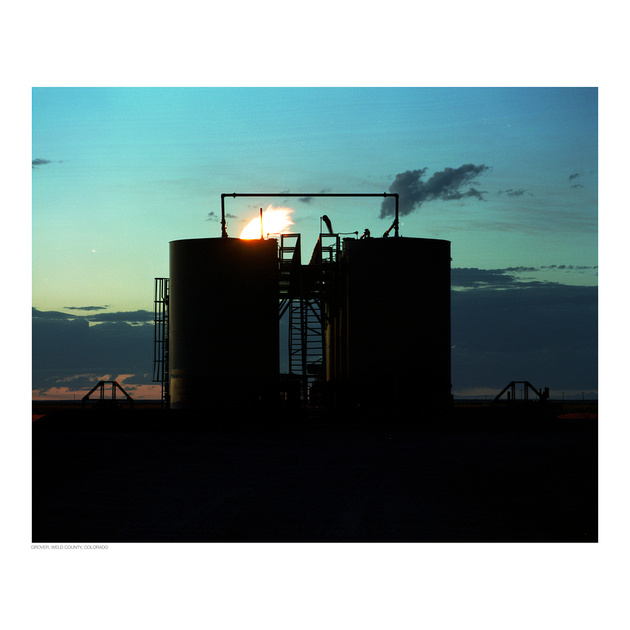 As the sky darkened I watched the flame at the small, nearby tank farm and thought how nice it looked against the darkening blue. Back out came the tripod, cable release and camera, and “thunk,” one more frame is made. Learning how to relax and enjoy the moment happened once I accepted the following: finding oneself in great light in an improbable location – one you’d never have planned – is a good way to produce some beautiful, naturally lit spontaneous images. At best, blessed if the world opens itself up revealing an image to me. At worst, the day being a wonderful outing in Colorado’s natural beauty; what I learned perhaps valuable to some future engagement. Just being “out there” is its own reward. The images are a bonus.

That was my day in – and my introduction to – Grover, Colorado.